Netflix has done it again! The popular online streaming site snagged Angelina Jolie to develop an upcoming film. Jolie is set to direct and produce Cambodian film, “First They Killed My Father.” 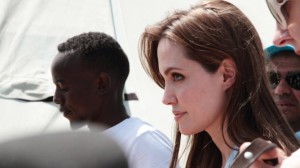 .  The film is based off Cambodian author and human rights activist Loung Ung’s memoir of the same name.

Ung’s memoir deals with her family surviving the Khmer Rouge regime. The film will be released on Netflix in late 2016. Although a decision hasn’t been made regarding a theatrical release, Netflix intends for the film to premiere at many international film festivals.

Can we be too surprised by this announcement? If Netflix was able to nab Brad Pitt and the original cast of “Wet Hot American Summer”, they can get practically anyone. Never underestimate the power of Netflix!

What do you think of Angelina Jolie’s upcoming Netflix project? Leave your comments below!