As a music critic a lot of albums come across my desk. Over time, much of it starts to turn into a blur. It’s not really the bands’ fault but so much of modern music has started to sound the same. Then I heard Anna Madorsky and suddenly everything changed. With a genre-bending sound and a truly unique take on the world of music, Madorsky is going to change the game for musicians everywhere, they just don’t know it yet.

Already three albums into an illustrious career, Madorsky’s music walks the line between folk, punk, and rock while never seeming forced or unnatural. Constantly experimenting and evolving her music takes the listener on a true journey with each and every album.

Unlike most musicians whose albums contain one or two standalone singles, each of Madorsky’s albums must be heard in full to be completely appreciated. Her music is a bit of an enigma as she simultaneously bares her soul in each and every song but keeps just enough mystery about her to keep you coming back for more.

Currently living in Los Angeles, Madorsky was born in Russia and raised in Texas and Tennessee. “Being a Russian Jew in places like Texas definitely made me feel like an outsider. Because of that I kind of created my own inner universe. I kind of forged my own path and threw away anything that wasn’t authentic to me,” she explains.

That need for authenticity comes through in her music. Even in her first album, Incantation, her unique approach to production in the creation process comes through. The result is an album that sounds surprisingly crisp and clean for her first effort. Three years and two albums later, she has perfected that style to the point where the listener gets songs full of rich melodies and layered instrumentals.

Coming from a family of scientists and engineers, Madorsky tends to approach her music methodically, from the inside out. “I think so much in terms of production, how other people get their sound. For me every album begins with a song and every song is a character. When you find your way into a character you find its voice and then you have to find a way to translate it onto a record. Then you can start pulling from different places. I think it frustrates people when they try and fit me into a genre because it switches a lot from song to song. I imagine each song having its own fingerprint,” she explains passionately.

“I remember being young and having that light bulb moment when I heard a song. For me it was Russian folk songs because they were always playing in my house. I remember the first band that became a big thing for me was The Cure, you can definitely hear some of the dream pop elements in my music. I’m influenced by everyone from Leonard Cohen to the Beastie Boys, there is no rhyme or reason to my tastes.”

“Every album is absolutely a narrative, look at the album Talk is Cheap. Track five is called “Verb” and the last two tracks are called “Unreliable Narrator” and “Epilogue”. Each one is its own book,” she notes, her eyes sparking with excitement. 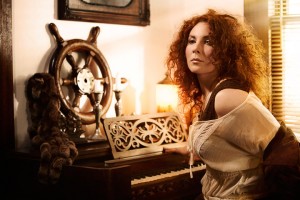 Madorsky has all the signs of a rock icon. She is smart, passionate, methodical, and has an undying love of music. She is currently working on a number of projects including a new music video for her single “Animal” off her most recent album Triumph & Symphony along with a series of mash up covers that “blur the lines between, subculture and gender,” she says.

To learn more about Madorsky and to listen to her music visit AnnaMadorsky.com.