With so many things in the comic book cinematic universe being changed from their source material, it is hard to keep them all straight.

This is especially true with 20th Century Fox and their roster of X-Men. Complaints range from “That’s NOT Deadpool” and “THAT was Gambit?!?!” to “Shouldn’t Colossus be Russian” and “How can you kill Cyclops?” there is quite a few issues to be heard. However, one of the most prevalent seems is the way that the movies utilized on of its most famous characters.

Rogue, the southern belle powerhouse, is one of the most recognized and widely used of all of the X-men, including leading appearances in video games, movies, and pop cultural references. However, in re-writing her origin for the first X-Men movie back in 2000, she was first found by Logan instead of Mystique. As a result, she was never a member of the Brotherhood of Evil Mutants, and therefore never had her run-in with Ms. Marvel that gave her the iconic powers of superhuman strength and flight.

While this was not a unique interpretation of her character – the animated series X-Men: Evolution also never had her fight with Ms. Marvel, it was a disappointment to many fans; as well as the woman who brought her to the big screen.

Many of Anna Paquin’s fans and followers on Twitter are asking her if she would reprise the role of Rogue in future films; particularly as she was teased with little more than a brief cameo in X-Men: Days of Future Past. In response, she had this to say: 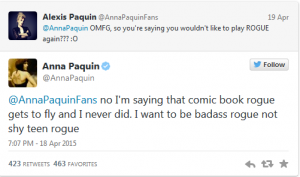 There isn’t any question: that’s a specific desired interest from Paquin. And considering her cameo at the end of Days of Future Past, it seems little wonder that they intend to use her in future projects, particularly the Age of Apocalypse story looming in the years to come. However, can the cinematic universe employ the flying, butt-kicking Rogue that the comic book and animated series fans came to love? The answer is an emphatic yes.

DoFP effectively retroactively affected the entire continuity of the series up to this point. We saw Marsden and Janssen at the end of that movie, so we can assume that the events of the previous movies are no longer canon to the story, and that a new storyline affecting the team is in place. So, from a continuity perspective, there is nothing from re-writing Rogue to be able to fly.

From a technical, film-making standpoint, there is also nothing to stop them from making her fly. Perhaps in 2000 when the character was first written, they didn’t want to push themselves too hard by making a character fly in every scene, showing off superhuman strength in every fight scene – not to mention it really undermines the potential threat of Toad and Sabertooth when you have a character who can throw a firetruck as easily as one throws a javelin. With the advancements made to digital technology, the audience will believe this girl can fly.

And, frankly, the team NEEDS Rogue to be her most famous incarnation, from a story telling perspective. In addition to their being a completely overwhelming amount of testosterone to estrogen ratio, there isn’t anyone up to par with her strength. Anyone with the brute strength of Juggernaut, Hulk, or even an Iron Man would easily overwhelm the team; she would fill in a slot of the brute that the team is otherwise missing.

Lastly, the reason to include her is competition. After many years in debates and rewrites, DC Sudios is finally gearing up to release Wonder Woman as a live action cinematic character. If the changes aren’t made, the options for those seeking female super heroes on the big screen are going to be either a super strong, flying, sword wielding, no-nonsense-taking Amazon, or a whiny teenager who hates her powers and a redhead in a leather jumpsuit who uses martial arts and guns.

The only real deterrent would be whether the director / writer weren’t happy with her ability as an actress, something that has never been widely voiced by anyone working with the actress in the past. Her acting is spot on, the technology is there, the story would allow for it, the fans want it… there doesn’t really seem to be anything in the way. While it might be a bold prediction, I would say that fans of Marvel can expect their southern heroine to be flying through the air and punching hapless villains through walls the next time she appears on screen.