How many times has there been an adaptation of Annie? Apparently not enough times. The classic rags to riches tale was revamped and released this month to suit 2014’s modern lifestyle, with an outcome they probably didn’t aim for. 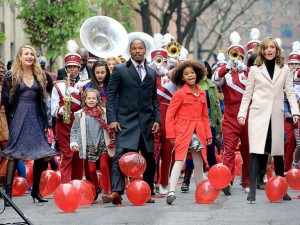 Annie gets a revival

In case you live under a rock and are at all unfamiliar with the story of poor little orphan Annie, I’ll try and sum it up for you: Raised without any knowledge of her parents, Annie, among other girls, lives under the care of the cruel Miss Hannigan. The relationship between the orphaned girls and their caretaker gain the titular song, “Little Girls,” crooned by the bitter Miss Hannigan, which essentially highlights the strain and dislike for each other.

The story continues to unfold, resulting in a chance meeting between the orphan, and the character of a billionaire (most commonly known as Daddy Warbucks) seeking to improve his social image by surrounding himself with Annie. She moves into his mansion, gets a taste of a life of luxury, using the advantage of money and power to search for her real parents.

This particular rendition mixes Quvenzhané Wallis’ portrayal of Annie with Jamie Foxx as Will Stacks, who is a candidate for mayor of New York. He also owns a flourishing cell phone company – just one of the many technological updates in this film. His chance introduction with Annie is sparked by a bump in the street, resulting in Will saving Annie’s life from oncoming traffic.

Again, since this version displays a heavy dosage of technology and social media in its plot line, the saving of Annie leads to a social media blow up, powering Will’s mayoral campaign. This then fuels the idea of him using Annie as a ploy to have other people perceive him as a kind-hearted, saintlike choice for mayor, and of course leads to the theme of love.

Quvenzhané Wallis made a charming Annie with buzzy performances, smart quips, and a carried inspirational demeanor for the duration of the film. She played along nicely with Jamie Foxx, complimenting each other’s interpretations well enough. Rose Byrne (starring as Will’s assistant Grace) was a delightful addition to the cast, providing some pizazz. Her dance numbers with Wallis were glittering, and fun to watch. Jamie Foxx’s comedic relief was a breath of fresh air from Cameron Diaz’s over exaggerated Miss Hannigan, who brought way too much energy and in the end dried out her character.

While Miss Hannigan is supposed to bring a sense of dread, and cruelty to the screen, Cameron Diaz did – just not in the right way. The only dread that came with her character was the dread of seeing her back for another scene for fear of how she’d botch it…not the dread of how mean she was to the girls.

There was only one other major issue in the movie, and that issue was the technology overload. You know what it feels like when you get a headache from watching screens too long? That’s how it felt to watch this movie, but not because the film itself was too long. The constant mentions of social media, whether it was the fellow orphaned girls, or the updates on it through Will’s cell phone company was just nauseating.

It’s unclear to me how accurate this representation of social media is in reality (probably very similar, especially within the element of preteens, and teenagers), however there was just so much influence of social media that it felt as though bits of the movie itself was a really bad joke that director Will Gluck was trying to play on the audience. So this is a note to other filmmakers that inserting large portions of technology and social media doesn’t make a plot better, it just makes it really boring.

Throughout the movie however, fans could hum along to the familiar catchy and uplifting tunes like, “Tomorrow,” and, “I Think I’m Gonna Like It Here.” While musicals aren’t always appealing to me, I couldn’t help but enjoy the contagious happiness lent off the screen during the durations of the dance numbers. Again, the performances were fun enough to engage all sorts of audiences. Unfortunately you’re unable to avoid the annoying social media takeover with this one, but it’s fun enough for the whole family