Actress Annie Wersching is one busy woman!  Wersching got her first big break on General Hospital in 2007, then moved on to the big leagues when she was cast in the epic series 24 in 2009 as Renee Walker.

She is now doing double-duty with two recurring roles in both The CW’s The Vampire Diaries and Amazon’s Bosch.  Press Pass LA talked with Wersching about three of her most current and iconic roles, and how she is able to juggle it all on top of being a mother.

Wersching talked about the 24 reboot, and what it was like being a part of the series as well as the mini-sreies  “It was kind of great, like, ‘oh wait, we can actually come back and don’t have to do 24 episodes? Thats amazing!’ They were considering doing a movie for a long time, so with the mini-series alternative we had longer than a movie, but still less than the full 24 episodes.” 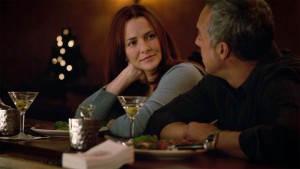 While she does not see 24 being brought back again anytime soon, she could see them rebooting it again in years to come. However, her plate is so full right now that it is really the last thing on her mind.  She is currently shooting two shows simultaneously, The Vampire Diaries in Georgia and Bosch in Los Angeles.  “I am definitely a bigger presence in The Vampire Diaries this season than Bosch.  However my character Brasher in Bosch was supposed to die in the books, so I’m very grateful to be back.  But its very on and off when I have time off from TVD, one episode here and one episode there.  But its nice to shoot Bosch because I get to go back to L.A. where my family is.”

She actually has her youngest son on set with her in Georgia, and her older son is with her husband in L.A. starting kindergarten. Seriously, this is one busy and devoted woman!  And it looks like one of her boys might have the acting bug. “We really don’t want him to have a desire to be an actor now, but anytime I am working on my lines he is really interested in it.  It was hilarious, one day he was helping me read the Damon lines (on The Vampire Diaries), then he got to go on set and see how it all worked.  It was very funny and surreal, my real son and my fake son.”

The Vampire Diaries is back for it’s seventh season on October 8th, and Annie’s role as Lily Salvatore, Stefan (Paul Wesley) and Damon’s (Ian Somerholder) long lost vampire mother, has a lot going on this season.  Last year we met Lily for the first time, and her main interest was getting her people, the Heretics back, who were stuck in a prison world for over 100 years.

When asked if and how her character changed from last season, she said, “I am actually going to be the one trying to reign the Heretics in.  She actually wants everyone to be one big happy family, but if that happened, then there wouldn’t be a show.  She definitely has a motherly side to her, and wants Stefan and Damon to give her another shot at that.”

Since Nina Dobrev left The Vampire Diaries at the end of last season, this season is going to be a whole new ballgame.  When talking about the changes in the show and how it is different from the last few years she said, “There is definitely a cool vibe to this season.  It’s a breath of fresh air to have new people in the mix. A very fun, fun, fun vibe that is different than before, for whatever reason.”  All we know is, we can’t wait!

Don’t forget to watch the season 7 premiere of The Vampire Diaries on Thursday, October 8th at 8 p.m. on The CW, and Bosch in early 2016 on Amazon.