ANT-MAN ANOTHER MONSTER HIT FOR MARVEL

Six-thousand-seven-hundred-forty-eight questions have arisen in my brain since the announcement that Marvel would be bringing Ant-Man to the silver screen. Prominent on many peoples minds: Ant-Man?  Really?!?  When kids are day dreaming and asking each other what super power they choose, the last one that comes to mind is turn into the size of an insect and talk to ants.

The often over-looked super hero gets little love amongst comic book fans, yet has loyal following, but with the laundry list of characters at Marvel’s disposal, few probably thought that Hank Pym’s story would have a stand-alone film.  However, trust in Marvel my friends, for they are developing a monster franchise surrounding their universe.  Behind Guardians of the Galaxy, Ant-Man might be their best addition yet. 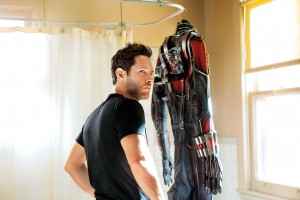 Ant-Man tells the story of Scott Lang (Paul Rudd), a thief turned straight turned thief again that falls in with Hank Pam (Michael Douglas) a once prominent scientist that developed the key to the Ant Suit’s shrinking ability. Pym seeks out and “recruits” (read: Lang steals the suit from Pym) Lang to break into his old laboratory to steal the shrinking technology from Pym’s evil successor, who has ousted Pym from his own research and company.  The plot sounds a little thin at first, but it is a nice break from the grandiose scale of galaxy ending catastrophies with which the Marvel super heroes are usually plagued.

Back to those super powers.  The powers are so well incorporated into this film that Ant-Man may finally find his place in the imaginations of children everywhere.  Rather than the grandiose, CG lazer and giant green men filled, over-directed fight scenes from the last Avengers film, Ant-Man’s powers allow for some of the most fascinating and funniest fight scenes I have ever seen.

From fighting in a falling brief case on top of iPhone apps to the back of a tiny Thomas the Tank Engine, Ant-Man’s fights are a visual feast.  It’s easy to see and makes me very happy that the original writer and director (Edgar Wright, who was famously ousted from the project last year) didn’t completely have his influence destroyed when he left.