THE ANTLERS AT MACK SENNETT STUDIOS

Brooklyn dream-pop band The Antlers performed an invitation-only show at Mack Sennett Studios on Friday night, presented by Pandora as part of the StubHub Next Stage concert series. 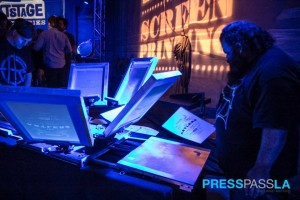 There were free silk-screened event posters, and a T-shirt you could earn by taking a photo in their studio and pushing it out to social media. And there was free booze. Lots and lots of free booze! One of the men next to me was holding 3 beers, all his own.

But the star of the evening wasn’t the free booze or the giveaways, it was The Antlers, whose lush, orchestrated brand of dream pop has earned them an army of loyal fans, and 45,000 unique Pandora stations.

Frontman Peter Silberman commanded the stage with his passionate, dream-like performance. The sound was moody atmospheric and languid, with flute and trumpet taking their place alongside drums, two synths and Sibermans’s guitar work. 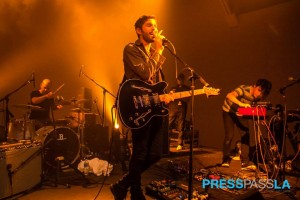 The Antlers played a full set, consisting of songs off their new album Familiars, as well as older favorites, such as ‘Kettering,’ and ‘Sylvia.’