We all remember the 1990s: a decade defined by grunge, Beanie Babies, and an infinite number of monkey movies (C—what was the deal?). As of this month, another ‘90s gorilla film has been unearthed for the modern viewer, and this is the strangest, campiest one of all: Ape Zone.

The “lost footage” from the original 1996 broadcast of this made-for-TV movie was recently found, commercial breaks intact, on a VHS tape in an someone’s grandpa’s closet. Well, that’s what Well Dang! Productions is saying, anyway. The story is, they digitized the found video and released it serially in ten short episodes, viewable on their website. The ‘90s illusion is quite thorough and convincing: an early fan even relaunched his old Ape Zone Fan Site from 1996, complete with a guest book full of people you won’t believe existed, but will laugh imagining they did.

Ape Zone’s premise is simple: ten strangers, trapped in a room, are being picked off one at a time by a madman in a gorilla suit. Their only connection to the outside world is a beeper, which signals them to choose who must die next. Though terror looms, these characters are so uniquely absurd, watching them elicits more laughter than fright, at least until the final episode, which provokes deeper questions, according to some viewers. 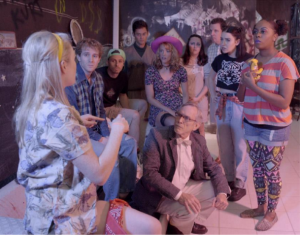 Alex Wroten, co-writer and director of the project, remembers the “ridiculous notion in the ‘90s that videos games were to blame for all society’s problems,” and Ape Zone addresses this issue in its own deranged way. Everyone inside the story is earnest as they ponder, with a faux-philosophical air, life and death in relation to video games. The characters’ seriousness, blended with the neon graphics, wobbly VHS lines, synthesizer-heavy soundtrack, and dialogue full of ‘90s slang, brings comedy to the forefront.

Nowadays, “things look more polished and cinematic,” says Wroten, who, like many of us, still gets nostalgic for the “weird charm” of the ‘90s, and with Ape Zone, he has found a way to poke loving fun at the era through a modern lens.