At approximately 9:30 PM Sunday night, the audience at Center Theatre Group’s Mark Taper Forum leapt to their feet in applause at conclusion of Rajiv Joseph’s  wonderful new play, “Archduke.”  The play tells a slightly-modified version of the real-life story of three young men sent on a suicide mission to assassinate Archduke Franz Ferdinand of Austria.

The story begins with Gavrilo (Stephen Stocking), a simple young man who yearns to find his purpose in the world.  In the play’s opening scene it is tragically revealed that Gavrilo is diagnosed with tuberculosis and isn’t given long to live. As Gavrilo leaves, Dr. Leko (Todd Weeks) is visited by Captain Dragutin Dimitrijevic (Patrick Page), leader of the “Black Hand”, a secret society bent on the liberation of Serbians from Habsburg and Ottoman rule.

The Captain threatens Leko into gathering four other terminally ill men so that he may enlist them for an important mission. Unfortunately only two other than Gavrilo, Nedeljko (Josiah Bania) and Trifko (Ramiz Monsef), gather for the mission. Dimitrijevic explains to the young men that they were selected due to the fact that they are already set to die in the near future and this mission will require an act that the Captain describes to be a form of martyrdom.

Their mission is to travel by train to Sarajevo, which at first excites the boys, as none of them have ever experienced a train ride, and much less a warm bed and hot food. However, once the boys reach Sarajevo, they must shoot and kill the Archduke Ferdinand and his wife Sophie before killing themselves with cyanide. 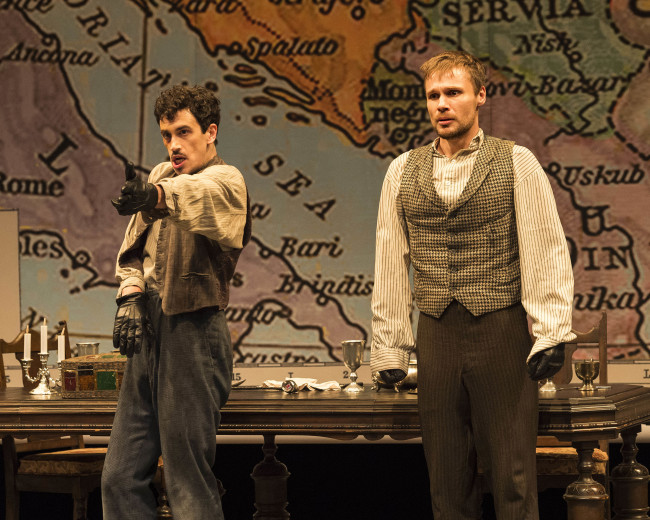 The enormously talented cast provides Broadway-quality work. Stephen Stocking delivers a hilarious performance as the dense, yet courageous Gavrilo, exposing the child-like innocence that one can’t help but smile at and sympathize with. Josiah Bania also provides laughs as Nedeljko, as well as the overly eccentric Joanne McGee as Sladjana, the Captain’s maid. Ramiz Monsef’s performance as Trifko is particularly brilliant, playing to the character’s rough exterior while also subtly exploring the characters fear of impending death.

Todd Weeks also wows as the protective Dr. Leko, but the true standout of this production is Patrick Page as Captain Dimitrijevic, who could more than likely win a Tony for this role should the production transfer to Broadway. Page commands the stage in every scene, sucking the audience in with his words just as his character does to the boys. Joseph’s writing places the character’s traits in line with that of Captain Ahab, exploring the depths of man’s anger and what he is willing to sacrifice for revenge. Tim Mackabee’s breathtaking scenic design is also worth noting, as it is presented with so much craft and detail that it even garnered applause from the audience, particularly in the play’s climactic train scene.

Overall, Rajiv Joseph’s “Archduke” proves that even the darkest of subject matter can be made light-hearted and fun while still maintaining a dramatic tone. Highly recommended.