ARE YOU HERE REVIEW

Matthew Weiner’s film directorial debut Are You Here,while not bad, leaves much to be desired. 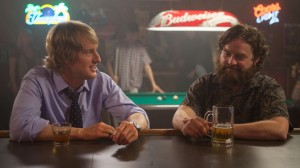 The genius behind critically acclaimed and audience devoured Mad Men seemed to have some tonal difficulties in this comedy (drama? mental illness case study? Self-aware environmental appreciation film?). With a standout cast spotlighting Owen Wilson, Zach Galifanakis, and Amy Poehler, hopes were high, and while plot meandered, the acting did not disappoint.

The story follows the interactions that ensue when Ben’s (Galifanakis) father dies. To everyone’s surprise and much to his sister, Terri’s (Poehler) chagrin, the majority of the family’s wealth and estate are left to Ben, the seemingly simple aspiring author who lives alone in the backwoods bordering an Amish town. Steve, the broke, womanizing local weatherman and Ben’s best friend since childhood drives back to their hometown on the weekends to help Ben figure out how to manage his money, and “assist” in his dream to create a more eco-friendly lifestyle.

Ben and Terri’s stepmother (Laura Ramsey), the naturally gorgeous and brow-raising mid-twenties widow of the seventy-seven year old deceased, at first glance is the cliché gold digger (because what does a twenty-something girl see in a man more than triple her age?), donning a nearly sheer white dress to the funeral. The complexity of Angelina’s character is soon revealed in a series of events beginning with the reading of the will. Everyone expects her to be the main beneficiary, however she is left only with a dedication of “the stars” and an extensive list of sexual memories.

We grow to love Angelina for her tenacity and honest appreciation of the simple things, especially when she repeatedly turns Steve down and mocks his self-medication: “I try and avoid things that keep me from feeling.” However, in the end she disappoints by falling into a stereotype that Weiner should have known better than to succumb to.

There are certainly some laughable points, but the overall feel of the film is misguided and confused. It’s part stoner BFF comedy, with an excessive number of scenes featuring Ben and Steve lighting up (overplayed), shifting tone to the dramatic intensity of Ben’s hopes for a more primal life and the questioning of his sanity. Scenes like Ben running pants-less through a field and intruding on the home of Pacifists leave us uncertain how to feel. He is the laughable character that tends to attract mockery, but his mental instability begs to be taken seriously. 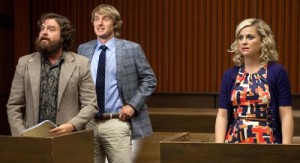 Though portions of the film have major cheese factor, there is depth once you wade. We wonder if the film would have been better received had it not been held to the high expectation as a product of one of television’s greatest writers. Misdirection aside, we can appreciate Weiner’s vision, and would be interested to see what he could do with this first feature under his belt.