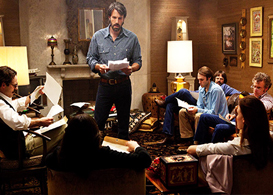 Ben Affleck has been a very busy man- directing, producing and starring in a new movie, Argo, which hits theaters tomorrow.  Argo is based on a true story that occurred during the Iranian Revolution in 1979 when the U.S. embassy was taken over by Islamic militants in Tehran. Fifty-two Americans were taken hostage, but six escaped and found refuge in the Canadian ambassador’s home.

Affleck’s character, Tony Mendez, is an extraction specialist with the Central Intelligence Agency (C.I.A.) who gets the idea to extract the six Americans by creating a fake movie and pass off the diplomats as a film crew looking for a location to shoot a Sci-Fi space movie located in a desert.

Argo had great cinematography that portrayed a balance between the stunning landscape and bustling city on the edge of a revolution while still showing the revolutionaries and actual events that occurred. During the credits, there were photos of the actual people who were extracted next to photos of the actors and actresses who portrayed them. There also were photos of different events that were portrayed in the movie alongside a photo of the corresponding scene. Showing those photos really helped the audience to truly understand how much effort went into keeping the movie as genuine to the actual events as possible, almost more like a documentary than a big budget thriller.

The tension between the citizens of Iran themselves, as well as toward the Americans, kept me on the edge of my seat during high impact moments. While at other times, the great acting and comedic timing of such stars as John Goodman and Alan Arkin had everyone in the theater laughing out loud. This comic relief helped to keep the movie from becoming too overwhelming. Being able to have so many tones and elements juxtaposed throughout the movie really speaks to not only the actors, but the screenwriters and the director. It really shows in the movie that everyone was shooting for the Oscar when they decided to take on this project, and given the content and execution, they should at least get some nominations.

Overall the movie covered a lot of information at a very fast pace, but in a way that was surprisingly easy to understand, even for someone who isn’t as familiar with the historical aspects of the plot. The great assembly of actors really contributed to the overall feel and tone of the movie to create something unique. Add to that the beautiful cinematography and the declassified content portrayed in a heartwarming, thrilling and sometimes hilarious way and you’ve got a recipe for a blockbuster.

Completely worth the full price of admission and a great success for Affleck and the other producers (including George Clooney) and crew who put the film together.

Argo is in theaters Friday, October 12th. Watch the trailer.