“I’m perfectly fine with my life. I’m very happy. I want to keep it that way.” Arnold Schwarzenegger said with a slight giggle at the press conference for “Terminator Genisys” on June 26, 2015 at the Four Seasons Hotel in Beverly Hills.

The action star also went on to speak about his thoughts on his character, time travel, technology, gay marriage, and having to do stunt work naked!

During the press conference, Arnold Schwarzenegger spoke about his view on making sequels to the Terminator franchise.

“I think that it really depends so much on the writing. I think that some people are capable of making a sequel more special than the original. You have seen that when the original Terminator came out and then James Cameron out did himself with the sequel which became the highest grossing movie of the year when it came out, in 1991 or whatever it was. And since then we have been trying to outdo that! Not always successfully, but that was always the intent. So this time I think the writers and the producers have done an extraordinary job. Really, living up to the standard of The Terminator.”

When speaking about his character, he went on to say: 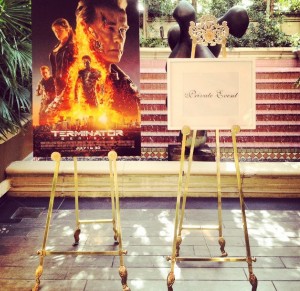 “It was very clear that my character was a  machine that destroy human beings -and wipes out anything that is in its way-  in the most brutal way with out any feelings or remorse. My mission is to protect the machines and to find ‘Sarah Connor’ and to basically be successful with my mission. In this movie, it becomes a little bit more colorful. Now I am again back to destroy ‘Sarah Connor’. I’m still this vicious, cold machine that is programmed to destroy ‘Sarah Connor’. And nothing will get in my way, except in this story something does get in my way, which is another Terminator. One that has been around for a longer period of time. The T-800 model, but he was programmed to protect ‘Sarah Connor’ and the human race. So there is obviously a major conflict with the two when they meet and that’s what creates that huge epic battle.”
As for doing stunt work naked on set, the Terminator got candid and had some pretty humorous thoughts about it!
“Well I think they are fun, because they are embarrassing and fun, and it leads to funny conversations and funny dialogue and great humor and everything like that. You know it’s inevitable, you have to do it because that’s what the movie shows. And there are certain times you can cover things up and certain times you don’t and you can’t and SO WHAT! I don’t think there is anyone here that had anything to hide.”

The Governor even spoke about his opinion on the Supreme Court gay marriage decision.

“When it comes to the Supreme Court I am very happy that they made the right decision on that because we in California of course we are always a step ahead. We made the decision already a long time ago. Our Supreme Court of California says its unconstitutional to deny people that are gay or same sex couples the right to marriage. Everyone has equal rights so this is the right way to go. I think that’s a great celebration for America. So sometimes I have to say that the judges, and the judiciary system makes better decisions than the politicians. Sadly, the politicians are not really having the balls sometimes to lead and work together on these issues.”

The 67-year-old action star also revealed where he would go and what he would do if he could time travel!

“I don’t know if I would be that interested in 1984, I think that if I had a chance to go back [in time], why not just go back all the way in history to the times of the pyramids or the Roman [Empire] days? I think there are so many great historic times throughout that until now, that I would like to get a little peek of those periods rather than just 1984. Why limit yourself? If I have to chance to time travel, I might as well go all out.” 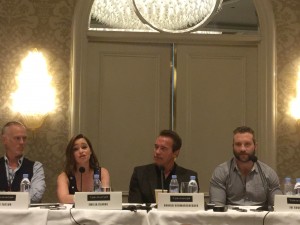 He concluded by speaking about his thoughts on technology and what is going to happen in the future! Does he know something we don’t?

“I think technology is good. It can be abused as everything else but I think it is good, and I hope that we will continue getting smarter and getting more interesting intelligence. We are going into a direction of artificial intelligence, or hybrid intelligence, where a part of our brain will get from the cloud the information. All this stuff will happen in the future.”
I also had the pleasure of seeing an early screening of “Terminator Genisys” in 3D IMAX. IT. WAS. AWESOME. Go see it! The visual effects were stunning and Arnold is BACK and better than ever!

When John Connor (Jason Clarke), leader of the human resistance, sends Sgt. Kyle Reese (Jai Courtney) back to 1984 to protect Sarah Connor (Emilia Clarke) and safeguard the future, an unexpected turn of events creates a fractured timeline. Now, Sgt. Reese finds himself in a new and unfamiliar version of the past, where he is faced with unlikely allies, including a new T-800 terminator, the Guardian (Arnold Schwarzenegger), dangerous new enemies, and an unexpected new mission: To reset the future… This movie will take you on a roller coaster of events that will keep you at the edge of your seat! It opens nationwide July 1st, 2015.