More often than not, science fiction seems to be guns in space.   Or robots in space.  Or SPACE IN SPACE!  Scrapping the explosions for mystery and intrigue, director Denis Villeneuve brings emotion and subtlety to the screen that is so often lacking in Hollywood’s giant budget sci-fi offerings—think more Close Encounters and less Independence Day.

Arrival is a film about the exploring the unknown above all else.  It weaves the audience through the curiosity, fear, wonderment, anxiety, bliss, and frustration of first contact with extra terrestrials.  Our conductor, and hero, on this ride is Louise, a leading scholar in the field of linguistics and sufferer of personal tragedy.  In the hands of a less capable actor, Louise would fall flat and leave the audience confused. 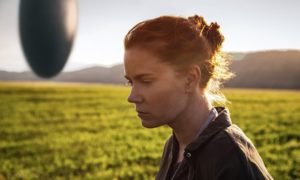 Amy Adams brings with her a child’s sense of wonder needed to connect the audience to the unintelligible aliens—expect Adams to get her sixth Oscar nod this winter.  As no one on earth is yet able to connect with our new friends, Louise is recruited to communicate with them and find out the answer to a simple question : why the Hell are you here?

It’s nearly impossible to elaborate on the plot without revealing massive spoilers (gasp!).  I will say this, Arrival is like an Everlasting Gobstopper – it hides a tear-jerking drama inside of a big budget sci-fi shell, using every bit of cinematic language to deliver its story.  It’s a fitting style for a flick about learning how to talk to aliens.  See this movie, you won’t be disappointed.