The Avett Brothers Take On The Greek

Friday night the South took over Los Angeles in the best way possible – with The Avett Brothers.

Bringing (all of the good) parts of North Carolina with them, the stars were shining bright above the Greek as the band took the stage at the start of a 2+ hour set. While the venue has gone through some operation drama over the past year, it still remains one of the most beautiful spots in the city to see a show, and a perfect backdrop for some Southern comfort. 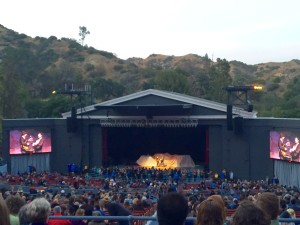 mixed with an unexpected banter that was just as entertaining as their music. I was glad I showed up early to catch their set, which was unfairly pitted against the notoriously loud rumblings of the theatre. Happy to report that by the end of their set, the crowd was in silent awe of the LA based duo, perfectly setting the tone for The Avett Brothers to take over.

Scott & Seth Avett took the stage with a few familiar faces (Bob Crawford, Joe Kwon, Mike Marsh, Tania Elizabeth, Paul Defiglia) and didn’t waste any time getting the audience on their feet. The first half of their set highlighted old favorites Down With The Shine, Die Die Die & Laundry Room. Their new single, Ain’t No Man, proved the band’s ever infectious pop-folk abilities were still on point as every hand in the Greek clapped along to the stripped down beat.

In the politically charged climate the country is in at the moment, an energized crowd sang the words to Head Full of Doubt/Road Full of Promise loudly with Scott – “When nothing is owed or deserved or expected / And your life doesn’t change by the man that’s elected” along with a unified “I’m frightened by those that don’t see it.” Following the song a man behind me slurred “that’s what I wanted, seriously what I needed – I can go now.” 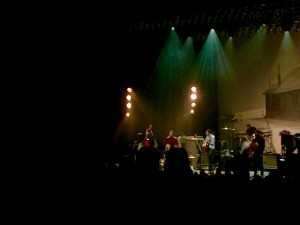 The night came to a close with Vanity, Merle Haggard’s Mama Tried, The Fall, Morning Song & fan favorite I And Love And You. With the large discography The Avett Brothers have, of course there were some songs (hint: The Ballad of Love and Hate) that were missed – but overall the set was a solid mix of old and new songs, never bringing the tempo down too low for too long, and leaving us all wishing the Greek’s curfew was just a little later.

You can pre-order The Avett Brothers’ new record True Sadness here – out June 24.