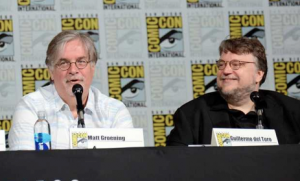 Surprising all 5,000 Simpsons devotees in attendance, director Guillermo del Toro joined the panel, discussing his “Treehouse of Horror XXIV” couch gag from 2013. Del Toro joked, “Many, many lonely nights as a kid” inspired the clip, a hodgepodge of horror movie references, including Hitchcock’s The Birds, Pan’s Labyrinth, and 1977’s The Car, starring James Brolin.

When several fans inquired about more Futurama/Simpsons crossovers, Groening replied, “Well, I’ll have to talk to myself about that. It’s possible, it’s possible. Fans of Futurama are still watching the show on Netflix. You know how everything gets rebooted? Futurama will get rebooted someday. We’ll see.”

SNL‘s Kate McKinnon, the cast of HBO’s Girls, Stephen Merchant, Michael York, and Spider-Pig from The Simpsons movie, are all expected to lend their voices to episodes this season.

Al Jean also let it slip that a spoof on Oscar nominee Boyhood called, Barthood is also in the works. “You see Bart as a 6-year-old, it’s a great episode airing this Christmas,” Jean revealed. 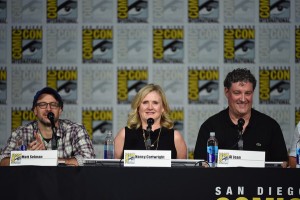 As the panel came to a close, Groening screened a clip from the upcoming “Treehouse of Horror XXVI.” The sneak-peek finally gave fans what they have been waiting 27 years to see – Kelsey Grammer’s Sideshow Bob finally killing Bart Simpson. Not to worry though, in an homage to Frankenstein, Bob raises the 10-year old troublemaker from the dead only to kill him and bring him back again and again.

The Simpsons returns September 27 on FOX.