Their is only one official Emmys gift lounge every year and that honor goes to Backstage Creations who plans the event for nominees which took place at the Microsoft Theater. PPLA was thrilled to get a sneak peak at what this year’s honorees took home.

The lounge treated presenters and performers with an array of luxury goods and also helped to raise $150,000 in donations to support the Television Academy Foundation.  The Television Academy Foundation was created in 1959 to engage and educate the next generation of the television industry. Its many programs include an acclaimed television industry internship program for promising college students, the annual College Television Awards recognizing top student television producers, the online Archive of American Television chronicling the stories of television legends and innovators, and unparalleled resources for television, film and digital departments at colleges and universities nationwide. 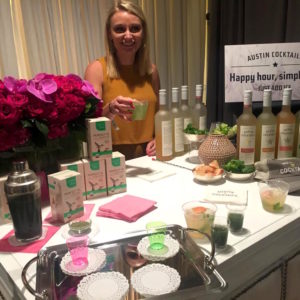 Austin Cocktails – Shameless star, William H. Macy, and his wife, Felicity Huffman, loved Austin Cocktails’ premixed cocktails so much that they came back for a second drink. Actor, Will Forte, also came back for seconds and said, “This margarita is better than Bali.” Actress, Minnie Driver, loved the cocktails so much, she said she would be serving it in her own 1930’s sherry glasses. Our personal favorite was the refreshing Cucumber Vodka Mojito…YUM!

Jaybird Freedom – While checking out the Jaybird Freedom wireless headphones, Modern Family’s Ty Burrell said, “Oh, I have a pair of these. They’re great!” Actor, Will Forte, also enjoyed the wireless headphones, stating, “Oh so these will work with my new phone?! That’s great!”  Our favorite feature is that we can workout outside without cutting tangled in your headphone cords!

Nu Skin Enterprises – Empire’s Terrence Howard checked out the ageLOC Me from Nu Skin and said, “My wife would love this!” While checking out the ageLOC me, Joel McHale exclaimed, “Does that mean I can have personalized skin care forever?!” We enjoyed how the NuSkin dispenser is tech-savvy and knows when to give you your day or night cream! Lets, be honest, before coff 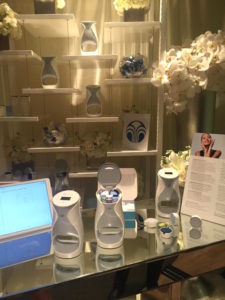 ee anything is possible.

Rottet Studio – Shameless star, William H. Macy, and his wife, Felicity Huffman, relaxed in the lounge area designed by Rottet Studio for nearly an hour before the heading to their seats for the show. Downton Abbey’s Michelle Dockery loved her candle from Rottet Collection by Air Aroma. She said, “I love candles. I’d love to have  a candle… or maybe two. It smells beautiful.” We enjoyed the unique decor and were thrilled to learn we could pick up the lamps at Target! Yes, please!

the hinde by kelli bailey – While checking out a leather bag by the hinde, Emmy winner, Regina King, stated, “I’ve never seen anything like it before—it’s terrific!” Downton Abbey’s Michelle Dockery fell in love with the hinde’s leather bags. She said, “The bag is so beautiful on its own. I could see it hanging on a chair in the house. It’s so comfortable that I hardly know it’s on.” SNL’s Leslie Jones picked up a beautiful red bag by the hinde and said she couldn’t wait to wear it.  This was by far our FAVORITE product in the lounge! The bags were so soft and stylish and we were obsessed with the metallic colors for the holidays! 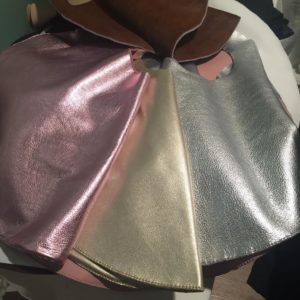 The Mulia, Mulia Resort & Villas – Nusa Dua, Bali – Actor, Will Forte, was thrilled to receive a trip to the Mulia Resort in Bali. He said, “OMG, that’s amazing. I’m going to Bali right now!” Emmy winner, Regina King, said, “You know what’s crazy? After my win, they asked me what my favorite place to travel was and I said Bali!”  PPLA is ready for take off! The resort looked so divine we’d settle for carrying one of the celebs bags 😉

I Can’t Believe It’s Not Butter!®  Black-ish stars, Anthony Anderson & Tracee Ellis Ross, jumped in the I Can’t Believe It’s Not Butter! photo & gif booth and had a blast. They even predicted that they would win an Emmy, holding up a sign that read, “I can’t believe we won!” Emmy performer, Tori Kelly, also had fun in the booth where she held up a sign in her pictures that read, “I can’t believe I’m at my first Emmys!” Of course, we took struck a few fun poses in the booth, check out our social media for the gif!