BALLERS IS ENTOURAGE WITH SOUL

The days of Entourage are over, welcome to the era of Ballers.

As a long time Entourage fan I was excited to see a new series from HBO that seemed to be in the same territory. But where that show was a full-on male fantasy Ballers is at least aware of Entourage’s faults and attempts to fix them. In this world actions actually have repercussions.

That is a huge step for a show like this where the focus remains on wealth and excess. At the center of it all is Spencer Strassmore (Dwayne Johnson) a former Miami Dolphins legend spending his retirement as a financial manager to his old teammates.  Strassmore’s insider perspective and access allows his to float freely between the normal world and the extravagant life of a pro football player, which makes for an interesting perspective. 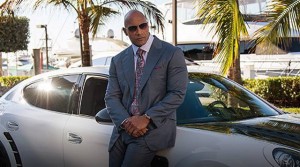 Dwayne “The Rock” Johnson leads the cast of HBO’s Ballers.

Casting Dwayne “The Rock” Johnson was a stroke of genius on the part of HBO and director Peter Berg. Johnson’s natural ability to come off as both a badass and your best friend propel the show forward in a way that makes it totally believable.  At this point Johnson could star in just about anything and make it good (San Andreas being the perfect example).

The rest of the cast is just as good. Making John David Washington, son of Denzel Washington and a former pro football player, gives the show a lot of credibility. Add West Wing alums Richard Schiff and Dule Hill and you have some serious talent on board. It will be interesting to watch all the players interact once the show really gets the chance to let loose.

Much of the pilot seems to be HBO apologizing for the excess it sold on Entourage. When one of Strassmore’s friends pulls up to a club in a new Bentley the first question Johnson asks is how he paid for it. At one point the viewer meets a rookie footballer whose house is literally crawling with people he doesn’t know looking to latch on to his lifestyle. That kind of self-awareness elevates the show as it tries to shake off an old school perspective on wealth.

Though no show should be judged completely on its first episode Ballers hits the ground running in such a way that the viewer genuinely cares about everyone involved. Every single person in the show is going through some kind of struggle and that makes them relatable and let’s be honest no one in Entourage was actually that relatable.

As much flack as Entourage gets it really was the show to watch back in its day. But more than a decade later it is time for a new perspective on the lavish lifestyles of the rich and famous. Ballers, without a doubt, is that show. It is down to Earth enough that it knows it can’t get away with everything but fun enough to remain light and comedic.  Give it a watch, you won’t be disappointed.