BAND OF ROBBERS NOT QUITE WHAT MARK TWAIN HAD IN MIND

Let us state the bottom line up front: You need to manage your expectations before beginning this film.

You need to know from the beginning that the filmmakers intended their 2015 film, Band of Robbers, to ground Mark Twain’s 1876 and 1885 classics, The Adventures of Tom Sawyer, and The Adventures of Huckleberry Finn in the modern era. However, they took liberties with the presentation of the stories with the unexpected merger of storytelling styles, most notably a strong inclination toward a comic farce and a heist film.

While any writer is entitled to be inspired by famous works or to add his individual voice to an adaptation, the decision to remove essential character traits from the principal characters, thereby rendering them unrecognizable, hurts the overall script by failing to deliver on a promise.

Let me be clear. This story includes two characters bearing the names Tom Sawyer and Huckleberry Finn. In fact, the opening scene establishes the story as the recollections of the main character, Huck Finn, at roughly 25 years old in 2015. We flash back about 16 years to a small Everytown, U.S.A. to see his relationship with his best friend Tom Sawyer. The scene opens from 9- year-old Tom’s perspective as he approaches the hollowed-out bus where Huck lives with his abusive, alcoholic father. We hear his father having an abusive episode from outside the bus. Tom calls for Huck and they go on an adventure. Tom is determined to find a hidden treasure and promises Huck that if they find it, Huck will never have to live with his father again.

During their expedition, Huck follows Tom as they trespass into an abandoned house. They are surprised to find Injun Joe also searching for the treasure. Just then, the boys hear the police sirens wailing and they bolt. Unfortunately, Huck is the only one caught and arrested. We see the 9-year-old Huck getting his mug shot taken. Then we jump to Huck as an adult, again getting his mug shot taken. We flash forward again, to see the juxtaposition of Huck and Tom as adults. 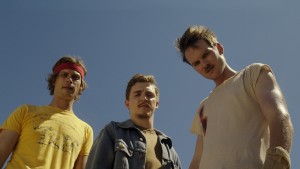 Matthew Grey Gubler, Adam Nee and Kyle Gallner are the Band of Robbers.

The tone of the movie is established during this sequence. We see Tom and Huck in ostensibly two different environments. We cut back and forth from Tom, now a policeman, as he sits for a professional evaluation back to Huck, still in prison, as he sits for his parole board. This scene establishes the tone of the film, the personalities of the characters, their initial motivation, and their plans for the future. Huck wants to have a decent job and a family. Tom wants to be promoted to detective on the grounds that his half-brother Sid was promoted to detective. He describes himself as a battle-tested, hero, and describes his job as “policeman.” When I first watched this sequence, I assumed Tom’s asinine behavior was sarcasm. The fact is, the sequence revealed the actual personalities of the two characters.

The souls of both Tom Sawyer’s and Huckleberry Finn’s adventures are arguably  coming of age stories which feature the characters’ defining traits. The classical Tom Sawyer is known for being wildly optimistic, witty, sly, and clever while engaging in mischief, and charisma that generate his adventures and navigate his way to a solution. The classical Huck is known for his independence from rules, his freedom of movement, pragmatism, and the practical sense that he develops as a result of his hard life and broad experiences.

Band of Robbers presents a Tom with everything except the intelligence and charisma, and a Huck without a strong sense of independence. The Band is rounded out with Joe Harper and Ben Rogers and they all meet in Tommy Barnes’ man cave. While Tom is minus intelligence, Joe and Ben fare far worse. Meanwhile, Huck, who actually does have the intelligence of the original character, is lacking the independence to not become a part of Tom’s wild ideas. Of all the characters, Tommy Barnes fares the best as he is the sole character in the band who is married, owns his home, and owns a business. When Tom announces his idea form the Band of Robbers to rob a pawn store and hunt for the hidden treasure, Barnes immediately drops out. This severe lack of IQ points sets the tone for the entire story and provides for the character of the story.

The formation of the Band and Tom’s revelation of his plan to rob a pawn store allows the story to introduce elements of a heist film. The rural small town setting, the surprisingly sparse presence of technology, and ensemble interaction combine in a manner vaguely similar to a Coen Brothers’ film. Further, the absurdity of their interactions and situation management is much like Dave Chappelle’s cult classic, Half-Baked. The limit of this comparison is that the ensemble in Half-Baked found themselves in situations that logically followed from the circumstances. And while the characters made poor decisions, they had the excuse of being impaired. There is no such excuse in Band of Robbers. Poor decisions were often illogical and unnecessary altogether. Examples of gratuitous ignorance include Huck and Joe Harper committing an armed robbery while wearing plastic, beige plastic bags that didn’t even have eye holes.

For all the areas the film needs improvement, casting was not among them. The cast inhabited their roles remarkably. And despite my complaints surrounding Tom and Huck, the actors had to deliver what was on the script. I am satisfied that they did that well. Everyone in the cast owned their roles and even maintained strong chemistry in their interactions. Their performances were a real bright spot in the film. Everything from the handling of the camera, the quality of the film, the look of the locations, and scoring was done aptly and smoothly. The only flaw was the script itself.

Band of Robbers’ attempt to bring Tom Sawyer and Huck Finn to life in a modern-day context leveraged a great deal of talent and quality production to expertly execute a tragically flawed script. The mischaracterization of Tom and Huck, the inexplicable risks during the robbery, and the missed opportunities to stimulate character growth degraded the effectiveness of the script and reduced the opportunities to develop greater emotional connection to the characters.