It may seem obvious that a concert should be fun but I can’t think of the last time I laughed, sang, clapped, or danced so hard at a show as I did seeing the Barenaked Ladies with opening acts Colin Hay and Violent Femmes at The Greek Theatre this week. 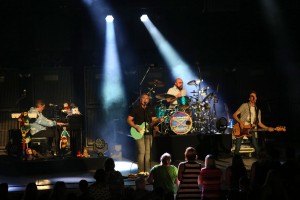 The band opened the show with “Get Back Up” and “The Old Apartment,” crowd favorites that instantly set the mood and went on to play hits including “Brian Wilson,”Pinch Me” (bringing back out Colin Hay), Big Bang Theory (the hit TV show’s theme song) and “If I Had $1,000,000.” The crowd didn’t have to be coached to sing along and dance in the aisles for any of these favorites!

But what sets this band apart is their sense of humor. Or should I saw humour, eh? This Canadian pop sensation was quick to make fun of their accents from across the border, their age -especially when highlighting how young Violent Femmes saxophonist Blaise Garza is as he stepped in for a few tunes- and their family life.

Other highlights? Jim Creggan played a bad ass bass guitar solo, Kevin Hearn (the band’s longtime keyboardist) sang a solo on “Passcode” which he dedicated to his daughter, and Ed Robertson brought his son Lyle out on stage to join in on guitar. Plus, they played my favorite Barenaked ladies hit “One Week.” 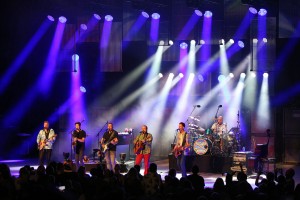 The moment that took the crowd over the edge was the song mashup just before the encore. This hilarious cover medley included  “I’m Not The Only One” by Sam Smith, “Shake It Off” by Taylor Swift, “Uptown Funk” by Bruno Mars, “Four Five Seconds” by Rihanna/Kanye West/Paul McCartney, “Take Me to Church” by Hozier, “Bohemian Rhapsody” by Queen, and finally a killer rendition of “Let It Go” from the Disney hit “Frozen.”

The band came back out to close the show with “Drawing” and a Led Zeppelin cover of “Rock and Roll.”  It’s no wonder Barenaked Ladies are going on 30+ years in the business. I’d see this show any day of the week.