If you’re among the legions of Batman fans, you will want to get on the next plane/boat/bus/car ride and make your way over to the Warner Bros. Studio VIP Tour in Burbank, California.

Where else would you be able to see the original suits worn by all of the movie Batmans – from Michael Keaton in 1989 to Christian Bale in 2012 – gathered under one roof for the first time?! Just think: this is only one of the many amazing goodies you can see there! In celebration of Batman’s 75th anniversary, Warner Bros. VIP Studio Tour presents “The Batman Exhibit,” now open this summer for a limited time. 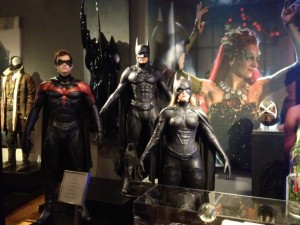 The exhibit kicked off Thursday, June 26th at the studios in Burbank, with an exclusive media event – and Press Pass LA was in the house. The event began in the studio’s Picture Car Vault, where a number of Batman’s most famous vehicles were on display – among them: the Batmobile, Tumbler, Batpod, Bathammer and Camouflage Tumbler. Members of the press were treated to speeches from Danny Kahn, the executive director of the Warner Bros. VIP Studio Tour and Jim Lee, co-publisher of DC Comics – even Oswald Cobblepot (better known as The Penguin) himself showed up! That’s right, Danny DeVito, who played one of the creepiest Batman villains of all time, was on hand to light the Bat Signal. Before doing so, the ever-hysterical actor joked about how strange it was that he of all people lit the Bat Signal, summoning Batman. DeVito jokingly quipped, “What about Two-Face?” 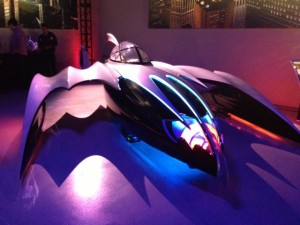 In order to head to the second part of the exhibit, press members were transported to the studio’s museum, riding there in a Batman shuttle. The entire first floor of the museum was chock full of Batman memorabilia: from costumes worn by prominent supporting characters and villains, including Two-Face, Riddler, Poison Ivy, Mr. Freeze, Robin, Batgirl, Penguin, Catwoman, and Bane, to a wide array of props, including Bane’s bomb, Joker cards, Penguin’s umbrella, and Two-Face coins. For the hardcore comic book lover, there was a display collage of some of the most iconic Batman comic book covers that visitors can utilize as a photo backdrop.

Whether you’re a Batman fanatic or occasional Batman enthusiast, the Batman Exhibit at Warner Bros. VIP Studio Tour is a definite must-see this summer – and THE only way to celebrate Batman’s 75th birthday! Tickets start at $54 and are available for purchase at WBStudioTour.com