PPLA was excited like most comic book movie enthusiasts, to watch the leaked Batman v. Superman: Dawn of Justice trailer. Due to the leak Warner Bros released the official trailer in the US today.

The trailer opens to only darkness paired with the music of Hans Zimmer, (The Dark Knight Trilogy, Interstellar and Inception). Then enters the ominous, foreboding dialogue, “Is it really surprising that the most powerful man in the world should be a figure of controversy?”

The question starts a slur of unseen commentators all debating the motives and influences of Superman. A panoramic zoom on a shadowy metropolitan area presents an enormous statue slowly coming into focus while the background banter switches between Pro and Anti Superman discourse. Multiple scenes are displayed of superman being revered. One of which has him center screen enveloped by a mass of worshippers reaching to be near him. Another scene shows a group of soldiers as they kneel before him and finally there is the monument of him 50 feet high. All this while the imperceptible critics continue to berate him throughout the montage. The superman bashing ends with a close up view of his dimly lit statue which becomes visible once illuminated by spotlights. With “False God” spray-painted across the distinguished S in bright red, it all alludes to dissension amongst the people of the DC universe and their views of the alien being.

In comes the voice of Alfred, Bruce Wayne’s butler and confidant (Jeremy Irons). He warns of the dangers at hand when the people turn against those they once turned to. Our first close up of the face of Bruce Wayne (Ben Affleck) suggests Bruce is coming out of some kind of retirement as he stares profoundly at his armor. The bat mobile makes an appearance being attacked by a stealth jet implying other human turmoil besides the big battle that the movie is named after. 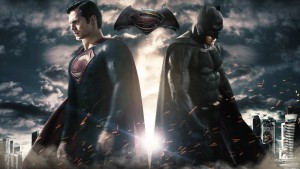 Viewers are given a glimpse at two different bat suits, one looks to be comparable to the Dark Knight trilogy Batman while the other, worn while confronting Superman pre-battle, appears akin to an Iron Man suit. We get to see an epic stare down between the reinforced-mech suit Batman and soaring overhead a sinister appearing Superman shrouded in darkness. Batman’s beaming neon blue eyes and machine enhanced voice threaten Superman “Tell me, do you bleed?…You will.”

The trailer will leave you wanting more with no appearances by Wonder Woman (Gal Gadot), Aqua Man (Jason Momoa) or Lex Luther (Jesse Eisenberg). The film is scheduled to be released in the United States on March 25, 2016 and will lead to multiple other movies including Justice League which will be split into two films.

The size of the DC movie universe could be determined by the success of this Franchise but by the looks of the preview it will be entertaining to say the least!