BAYWATCH FOR A NEW GENERATION

With the recent announcement of Kelly Rohrbach being the newest member to join the movie version of the iconic 1990’s television series Baywatc, the well-toned, well-tanned beach cast is becoming a veritable plethora of eye candy. 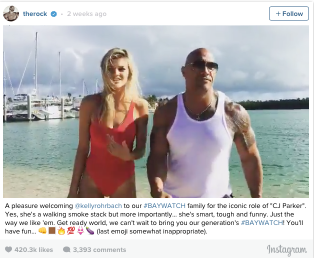 Paramount has played with the idea for some time, but reportedly moved full steam ahead when Johnson agreed to join forces. He, along with production partner, Dany Garcia (Seven Bucks Productions), Montecito Productions and Beau Flynn, as well as Michael Berk, Douglas Schwartz, and Greg Bonnan are all producing.

Now I must tell you that with Johnson on board, it’s no wonder Efron and Daddario jumped in. I love Johnson’s movies because they always entertain, and after all, isn’t that why we all go? Daddario is smart, beautiful and strong – both onscreen and off. And I happen to love Zac Efron, ever since I saw him in Seventeen Again. I am hoping the movie takes on at least some sort of comedic component, as I find his timing to be wonderful in this area. 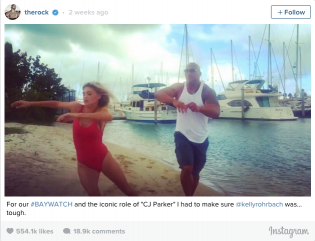 As for the casting of Rohrbach in Pamela Anderson’s role of C.J. Parker, I think she is perfect for the role. She is lovely, sexy and funny. She has a great tangling of tough and innocent without seeming dumb. I, for one, love to see that in female characters, no matter what type of movie or role they are in. However this is written – comedy, drama, action – or some of each – I believe she will translate well in this role and make it her own, for a new generation of Baywatch buffs.