Bear’s Den is one of those rare bands that you can actually feel the steam rising from underneath the second they take the stage. The band recently came through The Echo in late September with one of our favorite performances of 2016, and Tuesday’s show at The El Rey somehow made that production seem like child’s play. 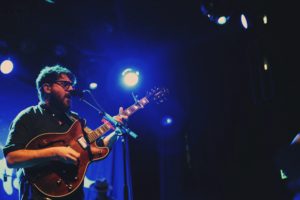 Diving in to a 17 song setlist, the London natives kept the top half of their show upbeat with heavy hitters like Red Earth & Pouring Rain & Emeralds. Clearly showing their excitement to be on stage, lead singer/guitarist Andrew Davie revealed that the few short weeks prior to the El Rey show had been “the longest break we’ve taken from touring since we started the band.”

Audience favorites from the set included Above The Clouds of Pompeii, Agape, Auld Wives and The Love We Stole. The band also introduced a new addition to their show – a cover song relating to every location they are playing in on this tour. For the Los Angeles kickoff show, we were treated to an acoustic version of California Dreamin’.

One of the most entrancing parts of a Bear’s Den show is how engaged they are with their audience. From unplugging and standing on the edge of the stage for a singalong of Isaac, to actually coming off stage and performing in the middle of the audience during the encore, the band creates a unique space in which the audience feels like an extension of their line-up – another instrument with which to create a totally immersive experience.

For more images from the show, click our gallery below!

You can find out where Bear’s Den will be next on their website, www.bearsdenmusic.co.uk.