THE OSCARS 2014, MOST MEMORABLE MOMENTS

“The mind of a writer can be a truly terrifying thing: isolated, neurotic, caffeine-addled, crippled by procrastination and consumed by feelings of panic, self-loathing and soul-crushing inadequacy. And that’s on a good day” ~Robert De Niro

If I took anything from tonight’s broadcast it was this quote. For me, it was one of the most memorable moments/lines of the evening. But let me start at the beginning. The 86th Academy Awards aired tonight on ABC. The LIVE broadcast went way over their time slot. Partly because Ellen – who hosted the show for the second time – was preoccupied with selfies the entire evening. Not to mention by eleven o’clock with thirty minutes left both lead acting awards, best director, best screenplay (original and adapted) and picture of the year had yet to be announced. The show started off a little slow with some of Degeneres’ jokes a little too “familiar” but picked up at the half-way mark.

In traditional Oscar fashion, Ellen focused her opening monologue on the overwhelming star-studded nominees, presenters, and guests. The real Captain Phillips was in attendance along with the real-life Philomena. The best joke in Degeneres’ opening number was aimed at Jennifer Lawrence who tripped on the carpet prior to the show. A second Oscar trip for Lawrence figuratively and literally. She fell last year while running to the stage to accept her win. Improv jokes like this seemed to help Degeneres throughout the evening. Bruce Stern was livid at Ellen’s “sex at the rodeo” joke (perhaps he just didn’t hear her) but besides him, everything here was kept light with no disparaging offenses.

First award of the evening – “Performance By An Actor in a Supporting Role’ – went to Jared Leto for Dallas Buyers Club. No shock here – although maybe to his date (his mother) who was the subject of his heart-felt acceptance speech. Leto also won the Independent Spirit Award the night before for his role as Rayon as well as the SAG award, and the Golden Globe. The biggest lock-in win of the night kicked the awards off with bona fide inspiration. The Academy loves when actors make touching speeches that rip the hearts out of the viewers and ignite their aspiring electric souls on fire. After all this is the most “magical” night in Hollywood. Leto transformed into the brilliant Rayon each and every day on set with the help of Adruitha Lee and Robin Mathews -who took home the statue for ‘Achievement in Makeup and Hairstyling’. 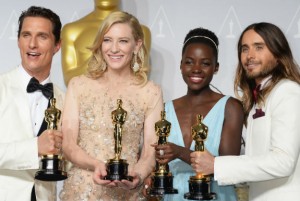 And what would hair and makeup be without a lavish set and ravishing costumes to match. ‘Achievement in Production Design’ went to Catherine Martin and Beverley Dunn for The Great Gatsby. Catherine also won for ‘Achievement in Costume Design’ which she has won previously for her work in Moulin Rouge.

Just as your eyes fill up and your tears begin to stream downward, while visions of Rayon flood your head, Jim Carrey walks out on stage to present ‘Best Animated Short Film’. Carey poked fun of himself for never being nominated and simply put – just awesome. The refreshing humor continued when Pharrell took center stage to perform “Happy” from the film Despicable Me 2 – infamous hat aboard. Despicable Me 2 did not take home the award for ‘Best Original Song’ which went to the obvious Frozen instead for “Let It Go”. Although this category isn’t one of the most exciting one of the winners was indeed just that. Robert Lopez, who co-produced and co-wrote “Let It Go” with Kristen Anderson-Lopez, became a rare industry dubbed “EGOT”. This win makes him one of the few people in the entire world to have an Emmy, Grammy, Oscar and Tony award. Frozen also took home the Oscar for ‘Best Animated Feature Film’.

Along with the other categories (hardly anyone cares about) 20 Feet From Stardom won ‘Best Documentary Feature’ and The Lady in Number 6: Music Saved My Life won ‘Best Documentary Short Subject’. Don’t act like you care the “hurry the expletive up music” hit before these winners got both feet on stage! Gravity itself could not keep them there.

Gravity, the film, however did keep us all in our seats at the Dolby tonight because it took home a total of seven awards this evening including ‘Achievement in Cinematography’, ‘Achievement in Directing’, and ‘Achievement in Film Editing’. This was Emmanuel Lubezki’s sixth nomination and first win as Director of Photography. It was a double first win for Alfonso Cuaron – who directed the film – and edited it beside Mark Sanger. Cuaron didn’t take home the ‘Best Director’ accolade the night before at The Spirit Awards which instead, went to Steve McQueen for 12 Years A Slave. If there was an “upset” of the evening this was it. The winners of the Independent Spirit Awards usually predict the the outcome at the Oscars the following night. For ‘Best Adapted Screenplay’ the Oscars followed suit with 12 Years A Slave taking the win. Her won for ‘Best Original Screenplay’ written by Spike Jonze; his first win after being nominated a total of four times.

The winners of the night in all: extremely predictable. Hardly any upsets.

The Wolf of Wall Street – currently destroying the box-office (domestic and international) went 0-5. I don’t label this as an “upset” I file it under straight robbery. Leo himself has been robbed by the Academy, single-handily – more times than I wish to count, that he most likely refers to The Academy of Motion Pictures Arts and Sciences as “Bonnie and Clyde”. The failure to recognize him baffles me more than Jupiter itself – planet and ruler of abstraction, puzzles, and disbelief.

I know – between the memories of Rayon and Leo’s goose egg – you’re out of tissues. We need an uplifting break. Let’s discuss some of the more enlightening sequences of the night in an invigorating bullet style manner, so you can read efficiently through the tears! 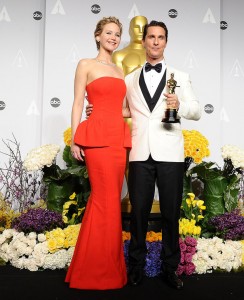 Feel-good moments of the night – from good to great or in no particular order at all:

Brad’s kiss to Angie after viewing the clip from her acceptance speech for the Jean Hershelt Award.

Meryl Streep and her glasses – just because.

The greatest selfie ever contained more stars than random moments – which there were a lot! Like John Stamos and Zac Efron – who presented. But nothing, nothing was more random than Pink’s rendition of “Somewhere Over the Rainbow” honoring the 75th anniversary of The Wizard of Oz. With all of Judy Garland’s three children in the audience – yes Liza was there! – the Academy couldn’t have got someone better than Pink? Not impressive. Gratefully, U2 was. Bono, The Edge, and entourage made up for Pink’s- fabulous stink – with their performance of “Original Song’ nominee “Ordinary Love” – where a backdrop of the great Nelson Mandela hugged the stage. Nelson Mandela was one of the great losses felt in 2013 round the world. The Academy paid tribute to him and the others lost this past year in their traditional “In Memorium” segment of the show.
While on the subject of significant losses, let’s get back to it. So yes, Leo lost again but Ron Woodroof did not – well, the fictionary Ron – portrayed by Matthew McConaughey in Dallas Buyers Club. Matt – who has swept the awards all season – took home his first Oscar for “Performance by an Actor in a Leading Role”. ‘Actress in a Leading Role’ followed the foreseen path with Cate Blanchett winning for her performance in Blue Jasmine. Out of the four acting categories of the night “Performance by an Actress in a Supporting Role” – still predictable – was the least “safe” bet. The SAG award and the Spirit award went to Lupita Nyong’O for 12 Years A Slave but Jennifer Lawrence grabbed the Globe earlier this year for her supporting role in American Hustle. Sometimes the Academy shakes this category up but opted to continue with the shock-less theme, handing the win to – the well deserved – Nyong’O.

Lupita got her first gold statue and a kiss from Brad Pitt – who embraced her with a celebratory hug on her way to the stage. Her speech received a standing-ovation – talk about dreams being made. The end of her fairy-tale far from over when 12 Years A Slave received the most prestigious Oscar of the ceremony, winning “Best Picture” – which earned Brad Pitt his first Academy Award ever. Pitt produced along with Dede Gardner, Jeremy Kleiner, Steve McQueen and Anthony Katagas whom all took Oscar home as well.

The 86th Academy Awards overall were – predictable – but a success. Ellen and her selfie crashed twitter setting a new record of their own for “most re-tweeted picture” of all time. The Academy definitely stood clear of controversy this year but Degeneres does possess the ability to be provocative. Her riskiest joke of the night referring to the Academy as “racists” if 12 Years A Slave didn’t take home ‘Best Picture’. Boundary pushing lines like this might get her better reviews but an invitation back for the third time? If one is extended – I imagine it would – she will surely push the envelope. Third time’s a charm!