The Big Bite Bacon Festival made its debut on the Queen Mary in Long Beach this past weekend, and Press Pass LA was there to take part in this sizzling pork adventure! Local restaurants and chefs presented unlimited tasting of their own unique spins on the star ingredient of the day- bacon.

The event took place in the ‘Pig Pen’ set up just outside the entrance to the Queen Mary. The pen featured about 25 food vendors, The Pig Pub bar, and the Pig Skin Classic, a scantily clad female football league practicing among the smell of crispy bacon.

In case all the bacon left you thirsty, their were plenty of craft beer samplings from local breweries including Lost Coast and Golden Road. For a non-alcoholic refresher the Lemonade Shakers were not to be missed. 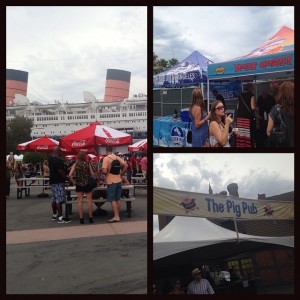 The festival included two tasting options- the lunch or dinner session and an option for VIP tastings (which got you in an hour early and helped you beat the hunger by skipping the lines. It also included a priceless ‘Got Porked’ T-shirt!) The public had the opportunity to vote for their favorite bacon-themes dish to help pick the People’s Choice Awards powered by Yelp, chosen by the cast of 98.7 FM’s new morning show The Woody Show. The event also featured a culinary cook off featuring pro-chefs, amateur at-home cooks, and even child chefs competing for a $1,500 cash prize and automatic entry into the World Food Championship in Las Vegas.

As if the bacon and beer wasn’t enough of a draw, tickets included free entry onto the historic Queen Mary and a special Big Bite Bacon Fest discount toward the 3rd Annual Rock the Queen Tribute Band Concert taking place that evening on board from 7PM to 1Am. PPLA took advantage of both opportunities and toured the stunning vessel including checking out the ships Grand Salon, infamous Tea Room, Engine Room and more. We certainly rocked the queen listening to music form  Queen Nation (a tribute to Queen), Negative Creep (a tribute to Nirvana), Vitalogy (a tribute to Pearl Jam), and Bella Donna (a tribute to Fleetwood Mac) while taking in the ocean views. 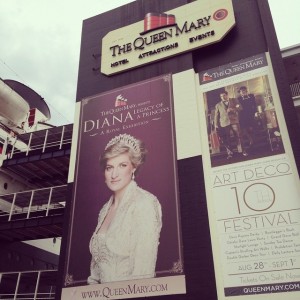 Up next at the Queen Mary? The Diana: Legacy of a Princess Exhibit. For more details on this event and upcoming attractions, visit QueenMary.com