The Weinstein Company presented a special screening of the brand new Margaret Keane biopic Big Eyes at The Theater inside Ace Hotel in downtown Los Angeles this week. The film delves into the artist’s tumultuous marriage with her late husband, Walter Keane, (Christoph Waltz) who took credit for her work for over a decade.

After the credits rolled, the film’s star Amy Adams took to the stage for a Q&A session with the film’s screenwriters, Scott Alexander, Larry Karaszewski and Keane herself. The soft-spoken artist, now in her eighties, revealed to the 1,600 attendees assembled that night just how thrilled see was to see her story come to life on the big screen, “Well, it’s just unbelievable. I really can’t take it all in. It’s just overwhelming.”The popularity of her wide-eyed, doll-like paintings of young children spread like wildfire in 1950s and 60s. Just as pure and trusting as her subjects, Keane could only watch as her husband pressured her into accepting him as the public face of the Keane brand and the believed sole creator of ever-popular images. The film features strong themes of innocence and ownership. 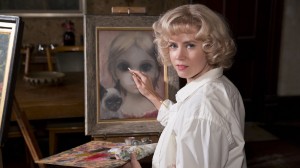 Big Eyes is, at its core, a refreshing, heartfelt and inspiring film about female empowerment. It is equal parts funny, serious and engaging, just like its protagonist. It declares that you do not need to be loud or brash to have your voice heard. Adams, who perfectly captured Keane’s emotional fortitude and vulnerability, revealed that it was Keane’s  “quiet strength “ that drew her to the character.

Although the artist disclosed that she had not previously heard of Adams, she was astonished by how the actress was able to convey exactly what she was feeling at the time.  She was equally astonished by how Inglourious Basterds actor, Christoph Waltz captured the essence of her late husband. She admitted,  “He looked like him, acted like him. It was like watching Walter. It was a very emotional and traumatic experience when I first saw the movie. I was really in shock for about two days. “

The artist was thrilled to have legendary director Tim Burton on board, as he is a longtime collector of her work. One would not immediately recognize this as signature Burtonesque production. It focuses more on the characters and plot than whimsical and fantastical elements.

Screenwriter Scott Alexander explained, “Tim recognized that excess style for the sake of it really wouldn’t fit with the story. He loved the idea of going back and doing an independent movie. He hasn’t made a movie with this schedule or budget since Pee Wee’s Big Adventure.” When asked about Burton’s involvement in “Eyes”, Keane joked,  “You know, I really directed it and he’s getting all the credit.” The crowd then erupted into laughter and cheers.

As the evening drew to a close, Keane urged moviegoers to learn from her story, “Stand up for your rights. Be courageous. Don’t be intimidated. “

It was truly a magical evening and a treat to see a living legend finally get the recognition that she deserves. Big Eyes opens in theaters on Christmas Day.