The story follows disgraced U.S. President William Moore (Samuel L. Jackson) whose plane gets hijacked on its way to Helsinki for a summit. But the terrorists don’t simply want to kill the President; they want to hunt him in the grueling Finnish wilderness.

Many have called the film Die Hard in Finland and that’s honestly not too far off. Hazar (Mehmet Kurtulus), one of the film’s main villains, is undoubtedly paying homage to Hans Gruber in his performance and manages to pull it off quite nicely. Still, don’t think of this as your average popcorn flick. Even before Jackson’s plane gets hijacked there is a fair amount of action and just enough world building that, despite the rather thin plot, you genuinely care about everyone involved. 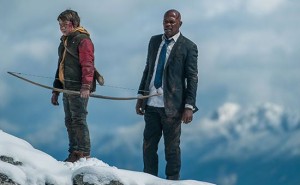 Big Game puts Samuel L. Jackson in the middle of the action deep in the heart of Finland.

Well, almost everyone, there is a secondary plot line that involves the Vice President (Victor Garber) responding to the attack that really seems to go nowhere. The core of story is the interaction between Jackson and Oskari (Onni Tommilia) as they fight the terrorists. When we first meet Oskari is preparing for a test of his manhood, a rite of passage among the hunters of Finland. Failing the first test he is told by the village elders that he must spend a night alone in the wilderness and come back with a prize worthy of a man.

While Jackson may be the big star of the film, it is really Oskari’s journey at the heart of the movie, and taking that approach pays off big. Jackson tones down his “toughest man in the room” approach for the film instead explaining to Oskari that “sometimes all you have to do is act tough, not be tough.” Though he has moments to shine Jackson puts a lot of the heavy lifting on Tommilia and the two play off each other well.

If you were to take that story on its own the film would work great. Helander takes it one step further by structuring it like a mid-90s summer action movie making the stakes that much greater. There are gigantic explosions, over-the-top villains and plenty of double-crosses. It is hard to watch the movie and be reminded of classics like The Rock and Enemy of the State, which aren’t bad comparisons.

Marketing for Big Game hasn’t been that widespread so it is hard to tell where you will be able to watch this one, though it will probably end up on Netflix in the near future. If you consider yourself a fan of action films at all you owe it to yourself to see it.