Hello anxiety, surely you have met my worst fear…open space. Jorge Michel Grau’s Big Sky, written by Evan M. Wiener, meets all the needed criteria to make a thriller movie and one that will play on all of your fears.

Tension, suspense and anticipation are all foreshadowed in the first moments of movie in which an ominous mood is set. Immediately, a forbidding enigma is created with shots of silent desert terrain. Desert sands are seen engulfing a van flanked with a dead corpse and an unexpected blood spattered hand emerging from inside the vehicles hindquarters.

Everything begins with Hazel (Bella Thorne), a teenager with severe agoraphobia and her less than exemplar role model and mother Dee (Kyra Sedgwick). Hazel lives an unjust house arrest due to her overwhelming fear of open spaces. A tedious daily regimen, of pill calculations and overanalyzing every detail, denotes a taxing burden put on relationship with her mother. 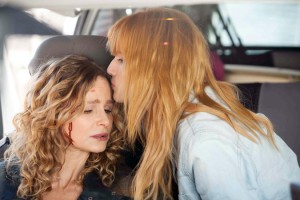 In an attempt to reclaim back her daughter from her debilitating afflictions, Dee enrolls Hazel in a high-end treatment facility in the desert. Dee has to coax her daughter to the awaiting facility transport in which Hazel climbs into a nearly coffin-like rear compartment of a van. It is customized specifically for her transport. Basically, she is out of sight from driver and the other patients.

Suspense is interjected when journey to facility turns hostile. Two masked assailants, Jesse (Frank Grillo) and his younger half-brother Pru (Aaron Tveit), savagely ambush them. Hazel, who has been hidden in her asylum, emerges after the massacre plays outs. She discovers that Dee has evaded the robbers’ execution attempt but has left her badly wounded.

Anticipation now stomps into storyline when Hazel, an unlikely hero, is tasked with seeking aid for her dying mother. As movie title implies, Big Sky is in fact what envelops Hazels’ sand paved “open space” nightmare. An unlikely paragon for valor, Hazel departs on quest to a Native American village that is a few miles away.

Forced to tackle her ever pestering and incapacitating phobias, the movie is filled with a myriad of Hazel’s self-control tactics and strategy to sustain her tenacious heebie-jeebies.

Truth be told the film has some hiccups but it doesn’t lack in ambition. The tale of survival is enthralling and a more than competent cast makes it worth seeing.

Big Sky opens August 14, 2015 and is available in select theaters and on VOD.