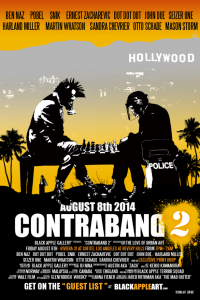 Black Apple co-directors, Eric Perlman and Jared Rothman are urban art enthusiasts/collectors themselves and wished to present the work of twelve notable international urban artists to LA’s elite. Hosted in Sofitel’s hip and upscale Riviera 31 Lounge, Contraband 2 was the perfect place to mix and mingle while taking advantage of this rare opportunity to view these controversial and thought-provoking works.

Guests admired the works of Seizer One, an anonymous street artist of the Banksy-directed Exit Through the Gift Shop fame while congregating around the lounge’s grand and modern bar. Seizer One has worked on the creative branding for indie folk band, Edward Sharpe and the Magnetic Zeros and Kanye West. Normally sold directly to private collectors, Contraband 2 marked the first time the artist’s work has been shown publicly. 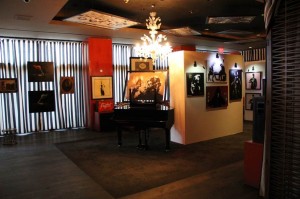 Perlman and Rothman also handpicked a selection of images created by Norwegian bad-boy and rising star in art world, Pobel to display at the show. Also anonymous, the artist goes by a pseudonym meaning Hooligan. Taking imagery from popular culture, Pobel’s work is filled with visions of a dystopian future, one ravaged by violence, pollution and an imbalance of power. Even his superheroes, aging and sickly, cannot do anything to help.

The world of comic books is also often explored in the work Canadian artist, Sandra Chevrier. The Montreal native made her debut at last year’s Contraband event and the curators were delighted show more of her work on Friday night. The self-taught painter is quickly gaining a following for her Cage series, a selection of detailed oil paintings of supermodel-type women covered with images taken from Spider-Man, Superman, Wonder Woman comics. The appropriated comic book drawings are literally on her subject’s minds, covering their mouths and imposing their restricted definition of femininity on them. 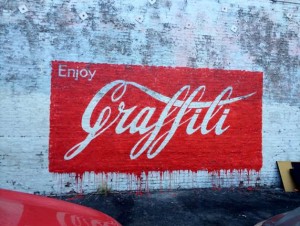 The Black Apple Gallery succeeded in bringing together a multitude of international voices in the urban art scene. It was truly a treat to view them all under one roof and in conversation with one another. Contraband 2 proved that street art is king and undoubtedly the future of the art world.