BLACK MASS ANOTHER MISFIRE FOR DEPP

The story of James “Whitey” Bulger has become the stuff of legend over the years.  The tale is so fantastic that it seems it could only have been imagined by the mind of Martin Scorsese.  Which is a feeling that is hard to shake throughout Black Mass.

Two friends grow up on the rough streets of Boston’s “Southie” neighborhood.  One joins the FBI the other becomes a ruthless gangster.  FBI agent convinces his whole department to look the other way as gangster does as he pleases. People die, gangsters get rich. There’s more to it but I’d hate to ruin the ending. 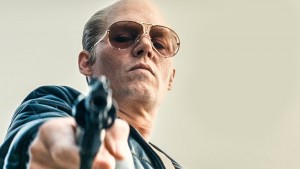 All the makeup in the world couldn’t save Johnny Depp in Black Mass.

Now, that may seem like a skimming over of the events of Bulger’s life, but that is the way Black Mass presents the story to the audience, and it fails.  Although it was not director Scott Cooper’s intention, the film comes off more like Dick Tracy than Goodfellas.  The incomparable Johnny Depp, who plays Bulger, portrays Bulger like an over-the-top comic villain.  This is accentuated by his appearance, with his slicked back white hair, dead teeth, and piercing blue eyes making him look like something out of a Bram Stroker novel.

Watching evil people do evil things on the silver screen can be enticing when the film offers the audience a sympathetic side, after all, the best villains in cinema aren’t overtly evil, rather believe what they are doing is right.  Black Mass attempts to offer those sympathies with the death of Bulger’s son, but falls short, choosing to ignore how the tragedy affected Bulger.  He’s the same awful person both before and after.

That’s the biggest flaw in the film and it takes up 90% of the screen time.  Cooper is so obsessed with showing us the bad guys being bad he forgets the character’s we sympathize with and many of them are left by the wayside.  And as a film lover, that’s just too bad.  If you want to go to the movies this weekend, go see Sicario instead.