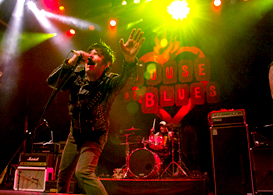 This past week Black Monday tore onto the House of Blues LA stage, clad in black, guns blazing. Prompting fans to chant the chorus of their opener, ‘Fight! Fight! Fight!,’ they roused the crowd for a high-octane half-hour of revved-up punk. From that moment forward, the tone was set: Black Monday came to dismantle us with their loud, tight sound.

The House floor looked mostly like a punk rock prom—a scattering of tattoos, fedoras, stilettos, red lips and long sideburns. Only instead of swooning couples slow dancing, there were several guys crashing into each other in the sincerest form of punk appreciation—the circle pit. Every song oozed bloody knuckles and gritty emotion. Black Monday was the epitome of bad-ass. Yet, they were clearly having a good time onstage.

Guitarist Joey Rome, bassist Rusty Sanchez and drummer Scott Peterson played at a blistering pace. By the third song, Rome had already broken two guitar strings. Regardless, the tune dripped with sinister undertones as lead singer Brian Christensen sang, ‘Don’t have to worry ‘bout the devil on my back.’

On my favorite song, “Shot to Hell,” Christensen seemed to channel The Murder City Devils vocalist Spencer Moody’s voice over catchy, rockabilly riffs. He commanded attention—sometimes standing, kneeling, or running his fingers through his jet-black hair as if he was recounting personal tales of darker times. For a man of small stature, Christensen’s stage presence made him appear 50 feet tall. No wonder his alias is “PIMP.”

The band threw in a ballsier version of The Clash’s “Brand New Cadillac,” followed by a couple more songs from their upcoming “Black Hell EP,” due out on iTunes in October 2012. The show ended with one final shot to keep the buzz going—“I Feel Alright,” a Damned cover of The Stooges’ “1970.” Their solid, high-energy set was over, but the impact had sunk in: If you seek salvation through punk rock, Black Monday is your religion.