You might have caught our highlight on breaking talent Blake Cooper last year when he played opposite Helen Hunt in “Ride.” But in case you missed our warning to watch out for this talent, we’re back with Blake and his latest project “Love Is All You Need?”

Love Is All You Need? is a provocative drama that examines a world where being gay is the norm and  heterosexual individuals are bullied. The feature film is directed by K. Rocco Shields and based on her award winning short film which garnered 60 million views on YouTube and was translated in to 15 different languages! We sat down to chat with Blake about being a part of this film.

PPLA: What can we expect from your new movie Love is All You Need?

BC: Love is All You Need? is a modern day Romeo & Juliet with a twist— it takes place on a college campus in a world where being gay is the norm and heterosexual couples are outside of the mainstream and are bullied. A guy named Ryan (Tyler Blackburn) and girl (Briana Evigan) fall in love and face a firestorm when their relationship goes public. Ryan is pledging to a fraternity in the film where he meets the frat president and football player, Bill Bradley, who has very strong feelings about the couple’s relationship. The story unfolds from there. It’s a passionate look at falling in love, intolerance, bullying, and faith. The movie explores the consequences of all types of bullying. At it’s heart, Love is All You Need? is everyone’s story because— no matter who you are— all people want the freedom to be themselves without persecution.

PPLA: You play the antagonistic Bill Bradley. Tell us more about your character and why you wanted to take on such a dark role.

BC: As an actor, I am attracted to interesting people and figuring out why they make the decisions they do. Personally, I’m very different from Bill Bradley— I’m happy to say that. But, it was a wonderful challenge for me as actor to get inside of Bill’s head. I think Bill has an intense relationship with power. I explored that a lot with this role. I also tried to locate where Bill’s intensity and anger comes from. I aimed to play Bill as a whole person which is why, for me, it was important to explore the ‘why’ of his character.

PPLA: What was the best part about working on the film— creatively and personally?

BC: The people. They inspired me creatively and have added to my life personally. The creative team on Love is top notch— our writer/ director K. Rocco Shields, her co-writer David Tillman, our on set producer Michael Zampino, and the whole Genius Pictures team made coming to work very easy. Because ultimately, they were fueled by a mission. And when you are setting out to make a movie and your heart is in the right place and you combine that with talented people— you can’t lose. I also got to meet some incredible actors who have become some of my best friends— Briana, Emily, and my buddy Rafi Gavron. It was an added bonus too that I got a chance to work with my friend Malcolm Mays again who I did another movie with— Life of a King starring Cuba Gooding Jr. 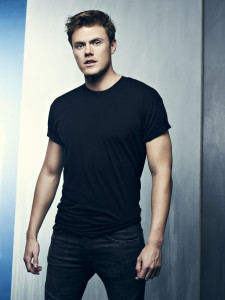 PPLA: Congrats on all the buzz you are getting for your performance and for Love winning the top festival award at Cinequest Film Festival!

BC: Thank you! We’re so stoked we won the New Vision Film Award. We had a blast premiering at Cinequest. San Jose is a beautiful city. James Franco and Rita Moreno headlined the festival this year— so it was great to have them there to support.

PPLA: What’s up next for you?

BC: I’ve been busy. I’ve been hopping around guest starring on shows like Major Crimes and House of Lies. I’m currently shooting a new movie that also stars Becca Tobin and Ryan Kelley. It’s a romantic comedy and lot of fun. It’s totally different from Love is All You Need?— I play the nice guy! That’s what I love about acting. Something different everyday.