BLAKE LIVELY FIGHTS FOR HER LIFE IN ‘THE SHALLOWS’

If you’re afraid of sharks, the latest Blake Lively film may not be for you! “The Shallows” is due in theaters June 24th and reveals around Nancy (Lively) as a surfer on a secluded beach who is attacked by a shark and is stranded and wounded just 200 yards from the shore.

The film was shot ‘Down Under’ and showcases the stunning beaches of Queensland, Australia. Directed by Jaume Collet-Serra (“Non Stop,” “Unknown”) and based on a screenplay by Anthony Jaswinski with production by Lynn Harris and Matti Leshem, the Columbia Pictures film stands out as a small film among a summer filled with sequels and blockbusters. But perhaps, this is just what an audience tired of tentpole films is looking for? 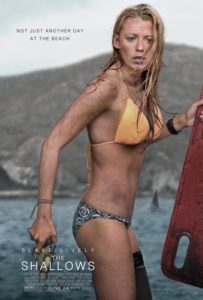 A thriller that could have the potential to become a modern day Jaws or at least an Open Water? Having not screened the film yet, it’s hard to say for sure if the movie is any good (in fact, it might be terrible) but the trailer certainly plays on the worst nightmare of any casual surfer and has me intrigued (also read squeamish).

Will Nancy be able to survive and use her athletics, ingenuity and resourcefulness to beat the Great White to shore. Or will she become another casualty of the ocean? Be sure to check out the film in theaters June 24th.

And if you’re in Los Angeles this weekend, June 18th & 19th, artist Simon Estrada will be illustrating special 3D street art on behalf of the film at the Pasadena Chalk Festival. Be sure to stop by… and don’t worry, you’re miles from the ocean!