Blow Your Eardrums with Mastodon

The night of Mastodon at the ever-so-accommodating Aragon Ballroom in Chicago reminded me of all the times I promised myself I was going to start wearing ear plugs to metal shows, and how I’d never actually made any attempt at doing just that. Two words: worth it.

You see, it’s only been two weeks since I saw Mastodon in Florida at Rockville and Fort Rock, both featuring outdoor venues that they absolutely dominated so I felt fully prepared for tonight’s event. I was excited to see them in a theater setting with a longer set list than the festival appearances and for good reason; “Emperor of Sand” is seriously growing on me at an alarming rate and this band shows no signs of slowing down.

Mastodon falls within a metal genre that has a broad range of fans whose more specific tastes range from Swedish death metal, thrash metal, progressive metal and so on, but also hard rock fans who only flirt with heavier music every so often. I am of the latter subset, admittedly, I tend to be choosey about who I assault my ear drums with and Georgia natives Mastodon have always been at the top of that list ever since their tour with Soundgarden in 2011 where I got the chance to see them at UIC Pavilion. 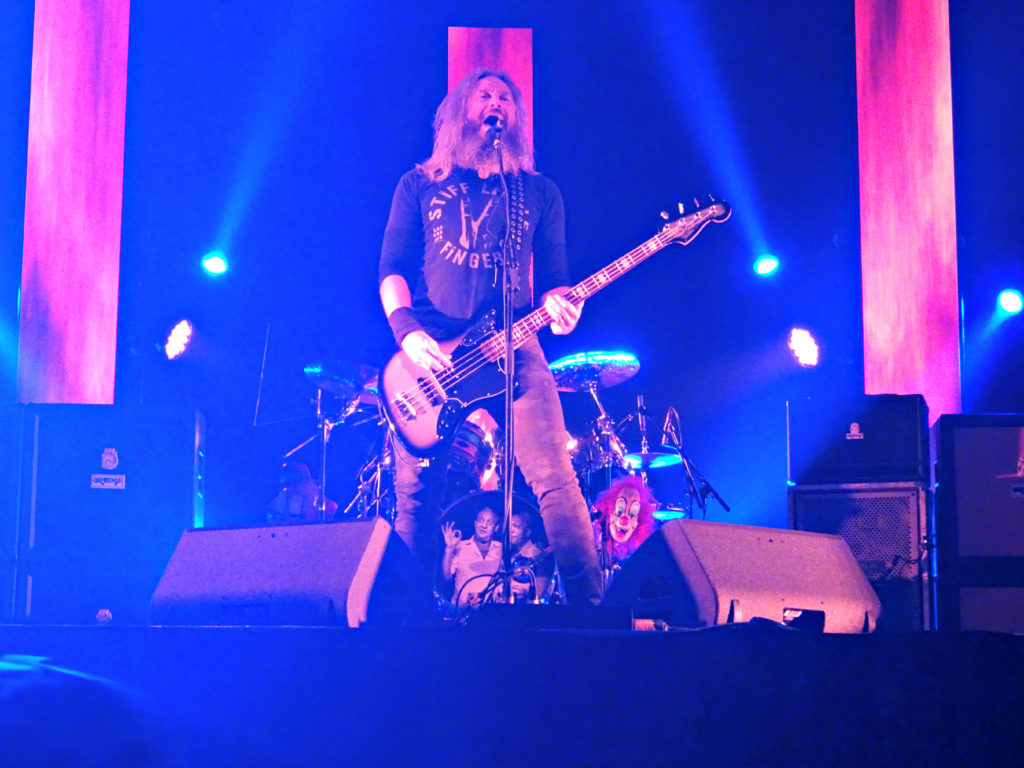 Troy Sanders of Mastodon tears it up in Chicago.

For those who have never dabbled with a band like this, it can be an intimidating venture but I personally promise any novice listener that there is a Mastodon song/album/era for you. My best advice, if you’re into the super heavy sounds, start with the album “Leviathan.” Work your way out of that to hit the more melodic and transitional style of “The Hunter”, winner of Kerrang! and Metal Hammer Best album award in  2012.  No matter what era of Mastodon you prefer, it’s hard to deny that their music is ever-evolving, something I believe to be very important in the heavy metal arena.

This band has been around for 17 years now and has released seven studio albums, the most recent being this year’s “Emperor of Sand”. They’ve toured the world and are deserving recipients of numerous accolades and nominations while continuously being ranked among the top of their genre according to industry publications and connoisseurs. They’re doing something right, and I believe it to be a combination of distinctive singing styles and progressive notions while always developing and working on new sounds and compositions for both new and old fans.

Back to where we set the scene, the Aragon ballroom was abuzz as I walked up, feeling at home among the sea of fans wearing black band shirts and sneakers with the faint aroma of beer in the air, I was ready to rock out on an unusually warm day in May. After a melodic Russian Circles set, the Eagles of Death Metal hit the stage in their always theatrical style playing fan favorites and giving us a little bit of a break from heavy metal riffs while we anticipated our headliners. 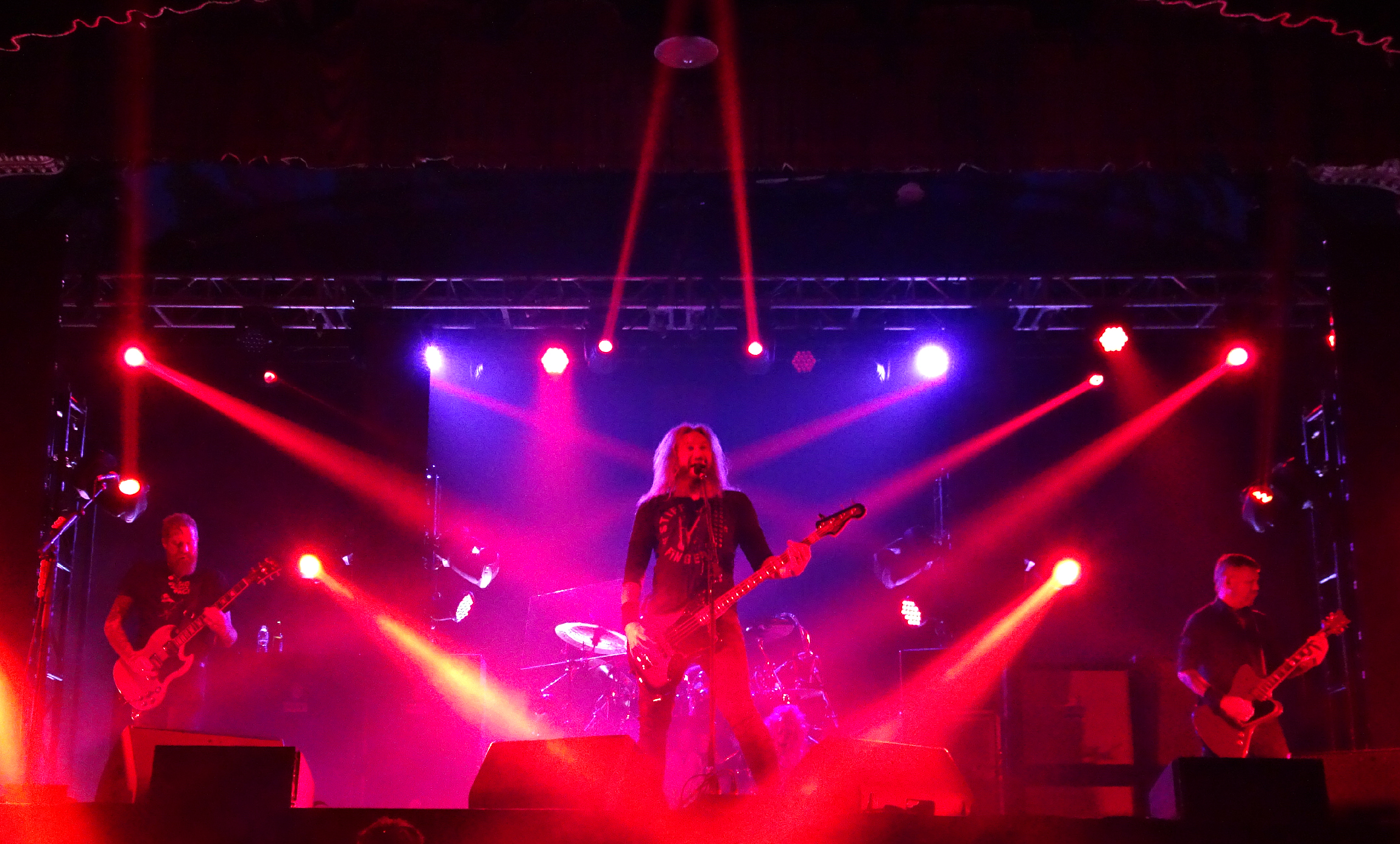 Mastodon hit the stage boldly opening with their new single “Sultan’s Curse” which starts with ominous bells ringing that engaged the crowd instantly. Being the true showmen they are, they worked the stage as they collaborated on vocals, something that I find unique about this band. Another thing I noticed immediately is how much their vocals have improved over time, not that they were ever poor, but the difference is noticeable especially in a live setting. They promptly transitioned into a hit off of “Crack the Skye”  called Divinations, followed by The Wolf is Loose and Crystal Skull off of their third album “Blood Mountain.”

The crowd was evidently filled with some hardcore fans as it seems they were getting progressively rowdier as the band continued to dip into some older material, among those were some very enthusiastic crowd surfers making the pit look and feel very authentic. 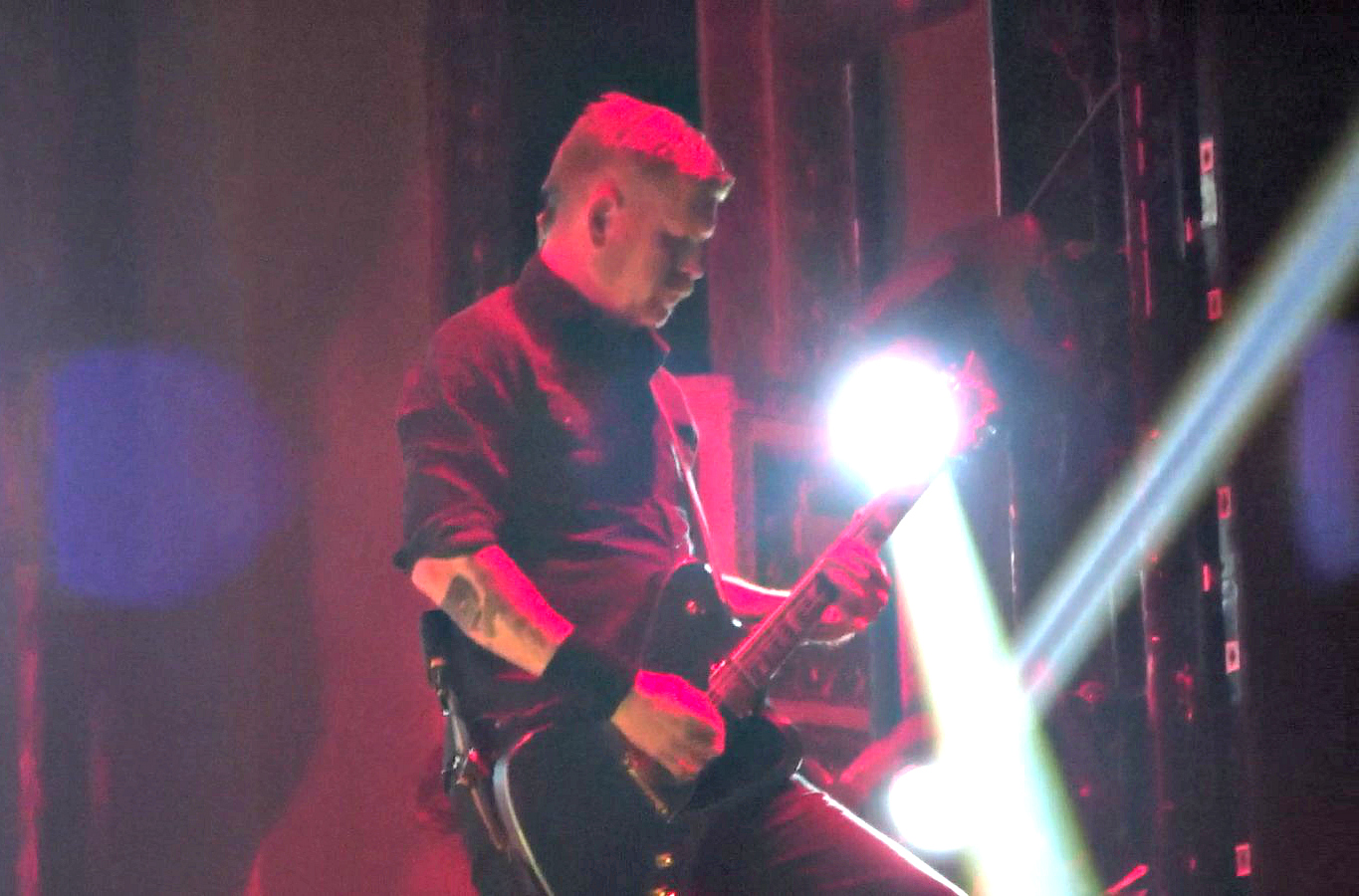 The mixing of Mastodon’s heavy sound was at odds with the theater’s acoustics when I compare to how they sounded at the outdoor venues I recently attended. I wouldn’t say that it put a damper on anything but I maneuvered my way up to the Aragon balcony towards the end of the 20 song set to see how they sounded on top of the crowd and I can’t say I was disappointed. It was a packed house and they didn’t slow down one bit as they worked through a heavy and long show finishing up with March of the Fire Ants from their early 2002 album “Remission” with the same level of energy they hit the stage with at the beginning of the night.

Rating:
As I left the show, ears ringing, with a posse of my friends carrying their merch posters and t-shirts, I could see the fans outside basking in the afterglow of getting their faces rocked off. Mastodon delivered once again and I can confidently give this performance an 8/10 with my only qualm being that some of the lackluster mixing distracted me from the meticulous and impeccable performance of the band itself. I’m sitting here, days later, working on my Mastodon playlist because I already have about four songs off the new album that are stuck in my head in steady rotation, something that hasn’t happened to me in a long while. Saturday night’s show and the lasting impression this new material has had on me is evidence that this album is going to be commercially successful as well as a hit with long time fans.