In BMI’s 75 year reign of celebrating songwriters, composers and music publishers there has only been one person that has been honored an award in their name, Michael Jackson back in 1990. Now, flash forward sixteen years and 26-year old Taylor Swift is bestowed the same honor, the Taylor Swift Award.

This Tuesday; Taylor Swift was celebrated at the 64th Annual Pop Awards which was held at the Beverly Wilshire Hotel. The star was accompanied by her parents and brother and of course sat at table number 13.

Taylor wore a simple shimmery black dress, with a long tail and a choker. Her new hair was also styled lovely with a light natural makeup tone that brought out her tan, most likely from her time in Coachella.

She was on the BMI stage many times during the night but it wasn’t until her Taylor Swift Award that she gave those touching and inspiring speeches she’s known for giving at award shows and during her concerts.taylor-swift-64th-annual-bmi-pop-awards-in-beverly-hills-1

“Thank you for awarding the favorite part of my life,” said Swift. Taylor Swift was all giggles while accepting her awards. And in a night that is about her career achievements, she was able to shine a light on all the other BMI recipients.

“If they had chosen somebody else, I’d be like, kind of bummed about it. This night has been unbelievable. Many of us in the room could only dr 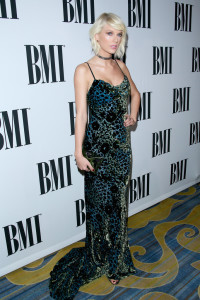 eam of accomplishing what you guys have accomplished. I have this issue called songwriting. I know you have it too.”

The star walked on stage carrying her phone with her; filled with cat stickers and glittery numbers that read ‘1989.’ She then proceeded to talk about the recipients who wrote songs that she had sang during her 1989 World Tour, and even mentioned others like Fall Out Boy and Colbie Caillat whom she worked with prior to ‘1989.’

Taylor has already broken many records and has accomplished more in her ten year career than most. With BMI Awards alone, she has received 37 including the President’s Award in 2009 and songwriter of the year in 2014. She also received four additional BMI Awards for ‘Bad Blood,’ ‘Blank Space,’ ‘Style,’ and ‘Wildest Dreams,’ all from her ‘1989’ album. She also took home the 2016 Songwriter of the Year BMI. And in 2016 alone, she became a ten-time Grammy award winner. And the only female to win a Grammy for Album of the Year twice, not to mention the youngest recipient of the prestigious award.

Even though Taylor is currently taking some time off after five hit records, it would not shock Swiftie’s all over the world if she surprised us with another album. Because creativity lives in her, and she truly loves her art. But then again that’s just hopeful wishing.