BOND IS BACK IN SPECTRE- FULL CAST ANNOUNCEMENT

James Bond is back and ready to fight against his greatest foe, SPECTRE, in 2015. SPECTRE, as diehard fans know, is the global terrorist organization run by Bond’s arch-nemesis Blofield. The cast includes returning favorites like Ralph Fiennes who will step in for Judi Dench’s M, Ben Whishaw as Q and Naomi Harris as Moneypenny.

Now here is where things get interesting. Daniel Craig’s version of James Bond started out as a reboot and landed the super spy in a much more grounded world. Evil lairs filled with random henchmen were replaced by espionage and danger on a real global level. People could actually get killed and Bond himself has been seen to age during Skyfall, something not even hinted at during the classic era of the franchise. 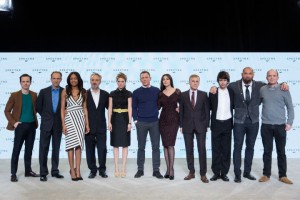 Even its villains were much more grounded and not outright evil. All that could change with the addition of SPECTRE to the Bond universe.  While things will never get as hokey as Moonraker it does give the franchise an opportunity to really spread its wings and breathe a little in a way that could completely revolutionize the genre.

The franchise deserves major props for taking the slow burn route in introducing the evil organization. Though it had been hinted at throughout most of the new movies the organization had never really been a driving force until now. Waiting until now to introduce Bond’s arch-nemesis is like waiting until Superman IV to introduce Lex Luthor. Although the franchise took its time the payoff is sure to be worth it.

A lot of its potential success is built from not just an already solid foundation of films but of some truly amazing casting. Though Christoph Waltz hasn’t actually been confirmed as Blofield all the data points in that direction and, honestly, it is the role he was born to play. What is more interesting though is some of the choices for its supporting cast members such as Dave Bautista. Before Guardians of the Galaxy I never would have thought Bautista could have survived a Bond film but he’s proved he can hold his own on screen and would make an ideal henchmen.

The biggest surprise and, dare I say, mystery is the casting of Andrew Scott. Anglophiles will recognize Scott as the insanely devilish Moriarty in BBC’s Sherlock. Scott can chew scenery like no one else and it would be amazing to see both Scott and Waltz share a few scenes together.

Bond 24 is shaping up to be the most explosive of the rebooted series. Keeping the franchise in Sam Mendes’ hands is a brilliant stroke in what is sure to be a transitionary film for the franchise. Mendes is not only familiar wih the world having done Skyfall but shoudl be able to find just the right tone so that things never get too campy.