Bonhams & Butterfields unleashed a trove of entertainment and animation memorabilia this past Sunday and Monday, from screenplays, to vintage posters, signed guitars, costumes, Disney animation celluloid and more. 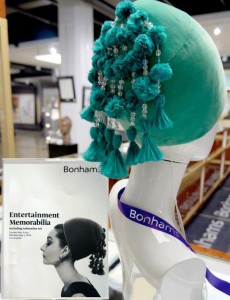 Two items stand-out the most, an Audrey Hepburn Givenchy hat she wore in American VOGUE, November 1964, published during promotions for My Fair Lady, which was released on Christmas Day. The hat sold for $46, 250.00, interesting enough, it also happened to be what would have been Hepburn’s 85th birthday.

The other was a rare Beatles ‘butcher’ cover, that hasn’t made an appearance since the last one was auctioned off in 2011. That album was a mono version, this one is a “first state”stereo version, a rare find in record collecting, and even more rare considering that it has only had one owner, who purchased it himself in 1966, that sold for $3,125.00. With items like these, it makes you wonder where do they find these treasures?

In her interview, Associate Specialist Lucy Carr states that Bonhams acquires their items through various connections, “The set of Frank Sinatra tour jackets came from his business manager Sonny Golden, Audrey Hepbun’s hat from a private collection in London, the Lynyrd Skynyrd tour jacket belonged to bassist Leon Wilkinson who gave it to a family member, The Big Lebowski bowling props came from a private collector who acquired them when the Hollywood Star Lanes closed in 2002. It takes us 2 to 3 months to put an auction on and one month before the catalog is published.” 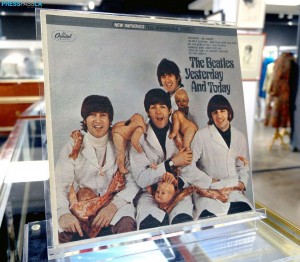 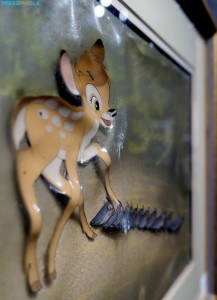 In fact, Bonhams has such a highly regarded reputation, sellers actually seek them out, taking a little pressure off the specialists during production. Another aspect to Bonhams is their affordable bidding pricing, don’t go looking for ridiculous amounts like Christie’s or Sotheby’s, of course this is an auction, so bidders will pay want they want, but starting bids range from a couple hundred to the low thousands. A set of Bill Graham’s Fillmore rock posters sold for $550.00 considering you’ll find them on Antiques Roadshow appraised for a couple of thousand.

Check out our Photo Gallery of the auction.