Boston Calling had two festivals this year, and Press Pass LA was there for the September 6th-9th, 2014 festival featuring The National, Lorde, Childish Gambino, Girl Talk, The Replacements and a ton more.

Held in Boston’s City Center, there is a decent amount of space for two stages, despite construction happening around the venue, including quite a few food vendors and sponsors. Samuel Adams held an Oktoberfest Celebration including a beer garden for people to enjoy their drinks. Jet Blue handed out beach balls and had photo ops and Capital One 360 gave away free coffee coupons to name a few swag opportunities. The food wasn’t super special but had a decent variety from your normal fair food to a wood burning pizza oven and a Halal certified booth. 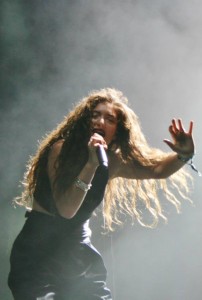 My personal favorite part of the extras was the Xfinity space where after you got a free bag (and sunglasses) there was lawn Jenga, Boston Calling themed Connect Four, TV’s playing various sports events and fake grass for you to rest your weary bones upon. It was a great place to relax between sets right near the food vendors and understandably was a popular spot for people to picnic with their newly acquired food.

The show itself went off without a hitch on Friday night, all of the bands played and it was definitely a more mellow night with bands like Neutral Milk Hotel and The National, not exactly known for having a guitar smashing kind of stage show. It was definitely a great way to kick off a long weekend and ease into a festival.

Saturday had a forecast for some potentially dangerous thunderstorms. Rain during an outdoor festival isn’t exactly unheard of, but when rain, strong winds and lightning are combined things can come to a grinding halt. Just when Volcano Choir was about to take the stage, there was an announcement that a severe storm was coming through and that everyone was to evacuate in an orderly manner to seek shelter.

VIP/Staff/Press were all allowed to stay in the VIP area since it was sheltered. After everyone left (in a surprisingly actual orderly fashion) things were delayed over an hour as rain, wind and lightning showed up in strong bursts. Knocking trash about, tearing down banners and of course completely drenching the festival grounds. I luckily got to observe all of this from a semi-reclined position perched on a stone divider, poncho at the ready in case I had to form a human bubble to protect my gear. It was a decently covered area in VIP but with winds that strong people on the outlying areas were still getting wet.

Unfortunately, the beer tent(s) in VIP were all along the outer areas so everyone was disappointed that they had to stop drinking. Luckily, some people had a few beach balls but even then people got bored eventually and retreated to the land of Candy Crush. 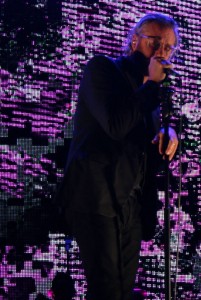 While things were mostly still in the VIP area, there were a lot of people just milling about outside the festival grounds, looking for a close place to grab a bite to eat or wait out the storm. One of these people was Jed, from Cambridge who was right outside the Capital One 360 location that was giving away the free coffee coupons. “Ironically, the doors are locked, I’m guessing that they were already closed for the day, and it was probably for the best for the lone barista working that day. He would have been slammed with orders from people redeeming their free drinks.”

All the while the festival organizers kept people up to date via Twitter, telling people that they were delaying in making any decisions until the weather passed. Responding to rumors that there was an alien abduction about to happen, and other general good humor. Eventually announced that they were evacuating VIP as well as there was another worse storm on its way that would delay things at least another hour.

This second storm never happened, and as soon as Boston PD gave the ok for the festival to resume they quickly announced that they were cutting Volcano Choir and Girl Talk completely, but resuming at 9pm with Lorde and then at 10 with Childish Gambino. This, as you can guess combined with the fact that the second storm never happened, caused an uproar from fans (via Twitter) who were there to see the cut bands, asking for refunds and shortened sets and other expected more severe backlash type comments. Most people though understood that it was out of the organizers control, and that although it is a rain or shine event, that lightning isn’t included in the factors for you to get a refund.

Around 9pm Lorde took the stage without any problems followed punctually by Childish Gambino. Lorde was so thankful for being able to perform, and put on a show complete with a costume change from a black bralette and MC Hammer pants (or Harem pants if you’re a fashionista) to this beautiful red flowing gown. When I was walking over to the other stage I heard some kid remark “I basically watched Lorde have a seizure for an hour, and I LOVED it”. By the time I turned around I couldn’t figure out who said it, so I can only assume it was one of our alien visitors hanging out in an invisibility cloak.

As Lorde wrapped up her show a chant of” Gam-Bi-No” took over the crowd and a very happy and oddly dressed Donald Glover took the stage. Draw string shorts, and an unbuttoned Hawaiian shirt seemed very out of place on stage, but somehow it worked for him. The girls in the crowd certainly loved it when he would throw his shirt open Michael Jackson style (minus the glass breaking). His stage show was energetic, rap battle serious and happy at the same time. Who doesn’t love a handsome, well-rounded man who can act, sing/rap and make you laugh?

I personally I was genuinely surprised to see a very large crowd back for the main headliners, not as large of a crowd as I would have expected had they not shut down at all, but still more than I would have guessed would come back for the show. On the other hand, after all they did pay to see the show, so why not come back? The festival for the rest of the weekend went off without a hitch.

Sunday’s shows started of very relaxed but got more energetic as the day went on. Definitely a highlight, and always a crazy stage show, Twenty One Pilots got the crowd really going doing everything from jumping off the piano, switching masks, and of course playing dueling drums while crowd surfing. A personal favorite for the weekend simply because they’re so energetic (and from Ohio like myself)they got the crowd going for the later acts.

Immediately after Twenty One Pilots was indie English band The 1975 and they were of course a source of high pitched screams of delight for the next hour, even stopping post show on the side to pose for photos with fans. As time got closer to The Replacements taking the stage, there was an air of excitement and uncertainty in the air. One never knows what will happen during a The Replacements show, especially not SNL who ended up banning the band from the show permanently. Although, seemingly sober and clearly enjoying themselves even Questlove commented via Twitter that he was enjoying the show stating that The Replacements doing “I want you back” was “kinda dope”. They even came back for an encore and ended exactly at 9:20 for Nas and The Roots to take the stage.

I was kind of surprised (but not entirely) that Nas came out solo without The Roots for the first few songs, but he played a lot of his solo hits right off the bat, so really it made a lot of sense. He always gives a ton of energy on stage, going from corner to corner and getting the crowd really excited. There wasn’t an end to that energy overall until the final moments of the show. In case you were wondering, yes Questlove’s hair was magnificent that evening.

Another weekend, another festival lineup of bands ranging from the ultra-mellow style of The National to the highly energetic acrobatic Twenty One Pilots. There was food, good times to be had and of course good music. The elements for a well-rounded fun experience was there for the taking. Live vicariously through PPLA in our photo album from the festival.