LA trio BRÅVES have released a debut album that blends beautiful pop/rock melodies with unique instrumentation, all the while keeping their identities a mystery. 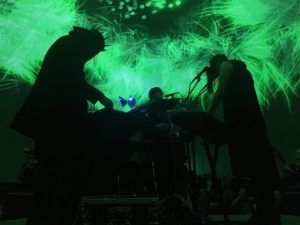 In a powerful performance to celebrate their self-titled album, BRÅVES immersed their audience in a 360 degree visual spectacle at the Vortex Dome inside the Los Angeles Center Studios. Press Pass LA has been following the band since they released the single Big Fish back in March, but the mystique surrounding them has only become more intriguing as time has passed. If you visit their website, for example, they describe their project as follows:

“Take three musicians. Conceal their countenances from the general public. Create pop music without an image. Roll it out through a series of beautiful, albeit unnerving videos. Circumvent the political, pandering bullshit associated with most record labels. Shock the system. Rinse. Repeat.”

Taking that description into account, it came as no surprise that their record release party was more of a mesmerizing, full-sensory experience than an average concert performance.

The album itself is an 11 track trip into what is possible when vocal experimentation hits the next level. “The human voice functions as the main variable within this experiment. Most of the sonic elements derive from the timbre and reverberation of vocal chords. Their resonances and tones clash with minimal 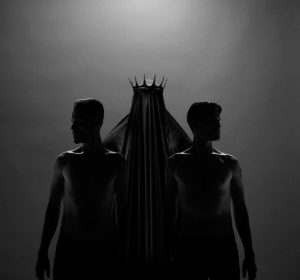 production, breeding a familiarity in its foreignness,” cites their website. This becomes more and more apparent as you stream the album a few times through – catching new layers within each song every time.

While there is little information to be found on when we can expect to see BRÅVES perform again, the mystery around this project will keep us on our toes, and the music will keep us coming back.

You can listen to BRÅVES impressive debut and purchase here.