What’s refreshing about Break Point is you don’t have to be a tennis expert to enjoy the ride. Director Jay Karas did an eloquent job of merging tennis with the underlying story that is the relationship issues between the Price family.

Jeremy Sisto, who co-wrote the film with Gene Hong, also produced and portrayed one of the film’s lead characters Jimmy Price. He nailed the role as a rebellious, aging has-been professional tennis player. You know that athlete on every team who thinks he is the big shot, the MVP, the know it all? Yeah, that is Price.

Off the court, Price has an alienated relationship with his brother Darren Price. It seems blood was not thicker than water, when Jimmy swapped Darren for another professional tennis player to advance in a tournament. This caused major tension within their family, and we later learn the brothers already struggle with family issues over the loss of their mother at a young age.

The audience is first introduced to Darren, played by David Walton, as a substitute teacher who just got over a break up.  The only silver lining in Darren’s downward-spiraling life appears to be one of his former students Barry played by Joshua Rush. Barry with his naïve, honest but likable attitude is the film’s breakout star. 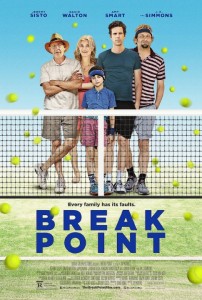 On the tennis court, Barry convinces Darren to accept Jimmy’s offer to team up together again for the upcoming Open. Barry’s famous line to Darren got the loudest laughs, “You have nothing to lose- you are just single, unemployed. You literally have nothing to lose.”

The chemistry between the trio Jimmy, Darren and Barry is electric on and off the court. Add actor J.K. Simmons as the father to the mix and this dysfunctional family is a comedy dream team. Some other famous roles included Olympic Gold Medal Tennis duo the Bryan Brothers, Amy Smart, Vincent Ventresca and former SNL cast member Chris Parnell.

The Price brother’s relationship changes as they start to spend more time together. But has Jimmy really changed? Will he drop Darren if a better player comes along again? Darren’s trust issues with Jimmy are still an apparent struggle. Just how far will one person go until they reach their breaking point? Will the Price brothers make it to the Open? The film is suspenseful enough to keep you on your toes and laughing all the way to the end.