Celebrities including Kelly Osbourne, Miss Jay Alexander, Leeza Gibbons and more joined the LGBT community and allies in Santa Monica on Sunday to help raise funds for the I Love Me Foundation’s #Backpack10 Campaign program.
The second annual Breaking the Silence Awards was held at the luxury beachfront property at the Fairmont Miramar Hotel  in Santa Monica​.

Board Vice-Chairman & Realtor, Yawar Charlie opened the evening by thanking the event’s sponsors, and introduced founding Executive Director, Robert Harrell, who spoke about I Love Me Foundation’s mission to end LGBT homelessness and reduce the numbers of LGBT sex workers by 2020.

“We all have a reason to break the silence,” said Robert Harrell, executive producer of the BTSA. #BreakingTheSilence is a sustained movement that impacts millions of lives. We honor the personal stories that motivate individuals to speak up, and that highlight the urgent need to provide inclusive and affirmative services to GLBT survivors of sexual trauma who so desperately need them.” 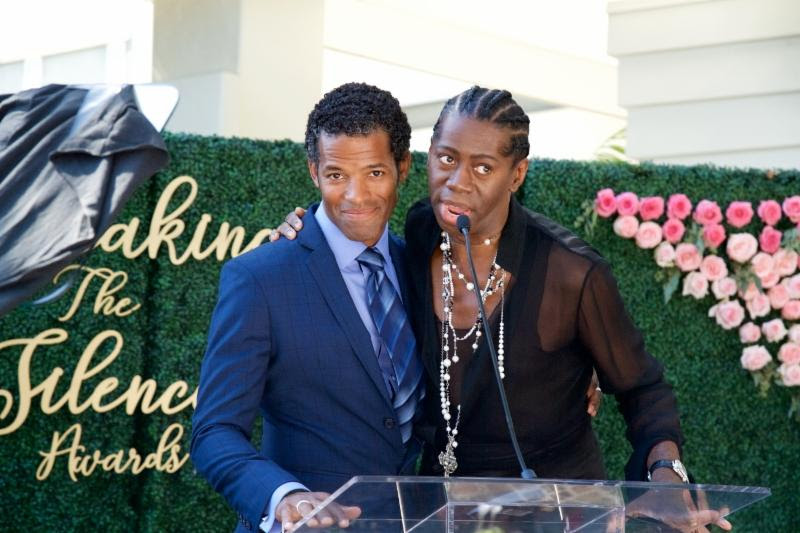 Former Mayor of West Hollywood, Abbe Land, was presented the 2017 Ally for Equality Award in recognition of her using your voice to stand up for LGBT youth​ issues​ ​by ​speaking out against bullyi​ng​ and​ equality for all Americans.
Williams’ Institute of UCLA Founding Executive Director, Brad Sears, was presented with the 2017

​James Baldwin Vanguard Awards in recognition of his profound effect in​ the​ lives of countless ​LGBT persons through his leadership of​ rigorous, independent research on sexual orientation, gender identity law and public policy.

OUT Magazine Editor, R. Kurt Osenlund, was presented the 2017 Outstanding LGBT Leader award in recognition his outstanding leadership contributions in the world of journalism in addressing the challenges, triumphs and stories ​of​ the LGBT community​.​

Pulse Nightclub Massacre Survivor, Angel Colon, was recognized with the 2017 Barack H. Obama Purple Heart Award, A special recognition for your audacity of hope in the face of one of the greatest american tragedies under the Obama Administration​. Forever #OrlandoStrong.

The final award recipient Celebrity DJ, Zeke Thomas, was presented the 2017 Breaking the Silence Award in recognition of giving a voice to the voiceless to break the stigma of males survivors of sexual abuse.

ILMFDN is a major force in the development of innovative and more effective services such as the #Back10Campaign which were designed to provide BackPacks with 10 essential survival items to GLBT and non-gender confirming youth & young adults who are underserved or experiencing homelessness. The I Love Me Foundation 2017-18 goal is to distribute ​at least 1,500​ ​backpacks across LA County in partnership with various LGBT organizations, City of Santa Monica, LA City Hall, Compton City Hall, and the West Hollywood Sheriff’s Office.