On Monday night, Heather Dubrow hosted an empowering event called Breaking the Silence at Avalon Hollywood benefiting Becky’s Fund. The event raised over 10,000 dollars for advocacy, prevention, and awareness for sexual assault and domestic violence.
The event featured vendors including Manly Handz, a mobile spa experience which provided complimentary massages in the lobby area;  Divas in Defense, which offers self-defense classes and an array of self-defense products like tasers disguised as bejeweled lipstick cases; and Project Photo Booth, a mobile photo experience (which we must say made everyone look glamourous!) 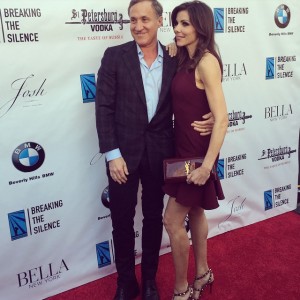 But the main event came from sponsor BMW of Beverly Hills who donated 2014 BMW i3 which was raffled off. The winner was Dr. Cohen, whose five teenage children were one of the evening’s performers in the band The Citie. In a rare twist of fate, The Citie offered to perform at the event pro bono the day before when the original entertainer for the evening, Tahj Mowry, had to back out due to a last minute scheduling conflict.  Dr. Cohen is actually a long time Domestic Violence Therapist and shared his story of how important this issue is to him. Ironically just days prior to the event, Dr. Cohen’s car was actually totaled so this bit of good fortune could not have come at a better time or to a more deserving winner! 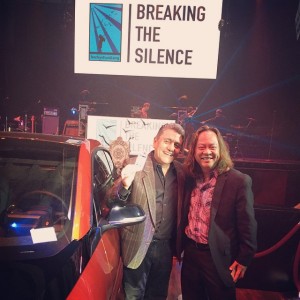 The event also featured a touching video presentation showing the work of Becky’s Fund and testimonials of domestic violence victims, as well as a performance by spoken word artist, Rhiannon McGavin, also known as The Geeky Blonde. The event honored Troy Vincent, EVP of National Football Operations of the NFL, with an award for his tireless work fighting to end domestic violence.