Paul Walker’s last film Brick Mansions isn’t exactly a big stretch for his acting or his stunt work or driving, but it is still an excellent film that takes the martial arts action that made films like The Raid so popular and actually gave it a significant plot and even some overt social commentary. Director Camille Delamarre knocked it out of the park with this one.

The film takes place in the not so distant future in a dystopian Detroit. In this alternate reality, the government has walled off and installed checkpoints at all of the main entrances to the ghetto. The idea being that the people there would run themselves without interfering in the livelihoods of the better off, financially secure and upper class members of society.

However, through a heist, the lead organizer of the drug ring operating within this walled off city, called Brick Mansion, has gotten a device that is the equivalent of a neutron bomb. So it’s up to detective Damian Collier, played by Paul Walker, to go into the depths of the seedy underbelly, retrieve the bomb and get out. While he is there, he also has to cope with the parkouring Robin Hood for this film, Lino, played by David Belle, and get revenge on the man who killed his father, Tremaine Alexander, played by RZA. What follows is a plot with intrigue, suspense and some of the best driving action this side of the Fast & Furious films.

The action, while creative and dynamic as they move through the respective sets, is somewhat difficult to follow. In order to maintain the PG-13 rating, the violence had to be toned down. It is frustrating to see otherwise intense fight scenes disrupted with shaky cams. There needs to be a fine line. Either write the movie in such a way so that those scenes aren’t happening, or hold the camera in such a way that we can better see all the details and let the rating fall where it may.

When it comes to action movies, there is never really a need for any kind of a sophisticated plot. Something along the lines of the classic Double Dragon, “they took my loved one, and now I have to get her back” kind of attitude is about the extent of the average film. Although there are aspects of that here as well, there is more to it than that. It isn’t just a classic damsel in distress, as said damsel actually has one of the most interesting albeit sexually driven fight scenes in the film. In addition, there is a legitimate social commentary made about the less fortunate and those in power and the multiple ways that the two of them interact. 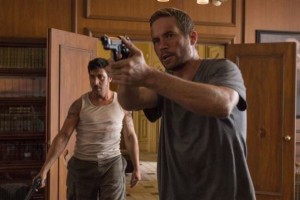 One aspect where the film definitely takes off is the driving scenes. It is uncertain whether or not Paul Walker just has a knack for picking solid driving scenes or if he has anything to do with the direction of them himself, but they were some of the strongest aspects of the film. Going from jumping around on rooftops to jumping behind the wheel of a car and doing quite a lot with not a large amount of space.

Brick Mansions is not going to win any kind of awards when the season comes around – aside from a potential token posthumous best actor for Walker – but it is still one of the better films of the first half of 2014. The acting, while kind of stiff, still feels like a natural reaction to the events and other characters in the story. The settings, while a little more pristine than the average ghetto, has a grime and grit realism to it that fully immerses the audience in Brick Mansions. The fast paced movements of Belle and the use of camera work in his scenes is quite impressive. There isn’t much in the way of a score or special effects, and the film didn’t suffer for it. The film wasn’t particularly special, but it is the better side of mediocre, which is a far cry better than nearly everything else that gets released.