Brokechella celebrated its fifth year last weekend with another fantastic event under the Sixth Street Bridge. Last year was their first time at the location, and they really ironed out logistics this time around. 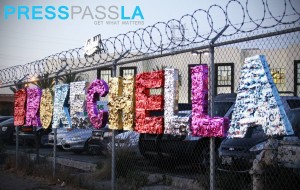 The event, hosted by arts production company cARTel (Collaborative Arts LA) started in 2011 as a small bi-annual initiative that evolved into the indie success that it is today, with the realization that it fell on the same weekend as Coachella: “Not a group to shy away from a challenge, we decided to embrace it, and welcomed 400 people into the very first Brokechella held at the Airliner downtown.” The best thing about this festival, is that it isn’t trying to be something it’s not.

The team’s success was evident this year, but not at the cost of their intimate indie mission. Brokechella partnered with LA Metro to promote green initiatives and incentivized festival-goers with $5 off the already low ticket price. Puppychella was also a selling point for moms and dads wary of leaving their pets at home (but really, who doesn’t love dog-friendly festivals?). Pet-owners were required to pre-register their dog, and were able to come and go as needed. The beer garden was also expanded to allow attendees to move freely about the grounds with their Lagunitas in tow. 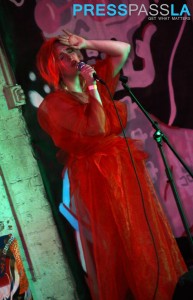 A number of local bands and solo acts graced the four stages as the day turned to night. The cARTel Indoor and Outdoor Stages, the Brownies and Lemonade Stage, and the Shifty Rhythms stage hosted a wide range of genres plus some comedic acts. The complete lineup was posted weeks before the event with featured profiles for every act and links to all of their personal sites and social media so that people who weren’t familiar with them could get amped.

The Artist’s Alley was as cool as ever, with work from eight different artists showcased between warehouses. Creators were on site and interacting with the public and certain pieces were available for purchase. Frank Rozasy was back again this year with his unique “Walk on the Art” installation, where fans literally had to walk across his work (800+ pieces for sale) to get from one room to another. Co-producers of Brokechella, Department 4 showcased their brand with cameras wired to devices that allowed guests to control the shots broadcasted on screens throughout the warehouse. 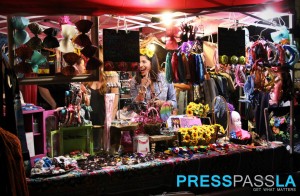