We caught up with director Emily Ting and actors Byran Greenberg and Jamie Chung about their latest project “It’s Already Tomorrow In Hong Kong” which premiered at Los Angeles Film Festival.

This film was shot on location entirely in Hong Kong and we chatted with first time director Emily Ting about the challenges of shooting overseas and how she scored real life couple Bryan Greenberg and Jamie Chung as her stars. Plus Bryan and Jamie tell us what attracted them to the script, how working with your significant other is, and why they fell in love with this foreign city! 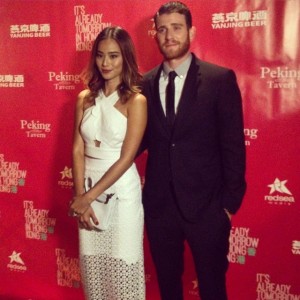 The film centers around Josh (Bryan Greenberg), an expat businessman living in Hong Kong, and Ruby (Jamie Chung), a toy designer who is working there on an assignment. They meet when she asks him for directions to a night spot. He ends up walking her there and they start to get to know each other developing instant chemistry. But when she learns that he already has a girlfriend, their encounter comes to an abrupt conclusion. Then they meet by accident a year later, when she has relocated to Hong Kong, and their connection is reignited over another chance encounter.

The film explores the theme of love and why sometimes, it’s all about timing!

Learn more about this film here.