June 2015 marked Bunbury’s fourth year on the Ohio River in Cincinnati, Ohio. The main headliners this year included The Black Keys, The Avett Brothers and Snoop Dogg, providing a little something for everyone.

Last year PromoWest Productions, an entertainment company based out of Columbus, Ohio, bought Bunbury and having been the past two years, I was eager to see what this year’s festival would be like. Kicking everything off on Friday was a not enough staff and entrances resulting in long lines, lots of grumpy people and two very unhappy festival reviewers. It took us 1.5 hours to get through the line which was par for the course from what we heard. 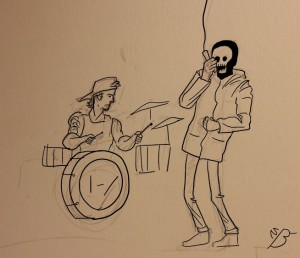 There were lots of complaints as people were missing bands they wanted to see, no shade or beverages to buy while you were waiting in line to get into the festival. There were more entrances opened and announced via social media, but data usage is spotty in large crowd situations so a lot of people didn’t get the memo.All of these issues were remedied for the Saturday and Sunday shows, so at least it wasn’t something that happened every day.

Now, on to the fun stuff, the actual music! Just looking at the lineup organization was very different from previous years. In previous years, the festival had a theme or genre on each stage. This year was more so themed by genre for each day. Friday was what I would call the Pop/Rock day, Saturday the Indie/Country day and Sunday was the Rock/Rap day.

Both ways make sense, and it seemed like there were plenty of 3 day wristbands in sight, so the reformatting didn’t really make much of a notable difference in attendance overall. One of my favorite things about the festival in previous years was their commitment to the local Cincinnati economy. There were all local breweries, businesses and food vendors everywhere. This year, it had some elements of local businesses but there wasn’t as many options for food, and the alcohol was mostly from your larger name brands (Jack Daniels and Coors to name the biggest ones). Less options for food/drink, also meant longer lines to wait for said things.

The festival itself was a smaller layout than previous years, but it worked well for getting from one stage to the next. The smaller square footage also didn’t allow for as many food, drink, and water stations so lines for everything were longer than in previous years.

Overall, there were some drawbacks that occur when a festival is ‘new’ but the lineup was awesome, everyone there was having a good time and there was good music to be heard. Lindsey Stirling sang her song “Firefly”, which surprised fans, since she normally does not sing it. Ohio natives Twenty One Pilots shot their new video for “Lane Boy” live during their set. Walk The Moon and Tame Impala got everyone dancing. The Black Keys brought the gritty rock. Kacey Musgraves and The Avett Brothers left their country souls on the stage. Snoop Dogg….was just Snoop Dogg, he didn’t need to bring anything else. Not bad for a weekend in Ohio. To close out this review, we leave you with some comics that were sketched at the show in lieu of photos.