Guess who’s back…back again…at Bunbury Music Festival. Well, sorry to say that it was just little ol’ me, and not Slim Shady but last year was so much fun that I decided to give the festival’s 3rd year another a go down in Cincinnati, Ohio.

With acts running the entire gamut  from acoustic folk to psychedelic rock, I had to see what the organizers set up this year. Here’s a look at some of the bands I got to meet up with, noteworthy activities to do as a festival goer and of course the music. 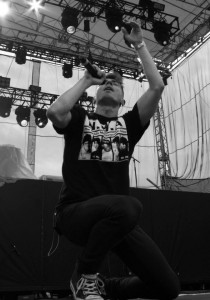 I was really impressed last year with the festival vibe. People were really laid back, no one was in a drunken rage, people said please and thank you, and in general were just there to relax and have a good time. Again this year, these things still held true, and I attribute that to the stereotypical Midwest concern for your fellow man. Which, I appreciate a whole hell of a lot more now that I’m getting older. Don’t get me wrong, I enjoy my mosh pits and angry music, but sometimes you just want to sit down with a drink and just enjoy the sunshine and the music. In this department, the festival folk did not disappoint.
After exiting the photo pit for New Politics I made my way to my partner for the show in the crowd. He immediately pointed out to me that there was a group of girls in front of us who were very very excited to see New Politics. I decided that these girls were hilarious and deserved for me to make their day. I got a great photo of David Boyd ready and tapped the young teenagers on the shoulder. I then waved my photo pass at them and flipped the camera around.

The sheer wariness, followed by confusion, realization and then excitement that went across each kid’s face was absolutely hilarious. I really wish that I had video recorded it. The parents of the kids got a huge kick out of it and so did the band when I told them the story. Apparently, this was the first music festival for the girls and my fun little joke really made their day. I’m sorry that I failed everyone, I probably missed my chance at viral video fame. Ah well, such is life. Needless to say the friendliness of the parents and the kids, is a good example of the kind of people you are likely to run into at Bunbury. 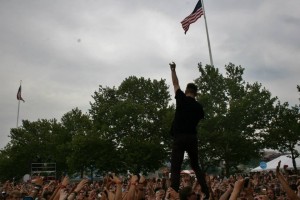 A lot of festivals will jam the entire place full of vendors just so they can turn a quick buck charging for booth space, but Bunbury seems to be more concerned with variety and quality over quantity. Sure there were a few booths that were too out there for me, but a lot of them had some cool quality or aspect that added to the entire festival feel. A booth selling sandals had corn hole boards out for people to use with their friends or challenge the employees to a match. There were a few larger corporate booths like Black & Mild, Pure Romance & AAA to name a few but there were also a very large amount of local clothing and art booths.

The most notable ones for me personally were the Pantene and the Pure Romance booths. Let me start by stating that last year Trojan was at the festival selling dildos that ended up being thrown on stage and that did not go over well, so I was REALLY surprised when they had a Pure Romance booth. However, they were giving away silver bullets for free to women who turned in an email address, sunglasses to whomever wanted them, and lots of samples of lube. It was really funny to watch guys go up and give the booth workers shit for not having something for them, only to have lube given to them. That awkward moment of lube gifting absolutely made my day every time I saw it.

On the flip side of things, Pantene was giving away tons of dry shampoo, had self-serve festival hair stations and even stylists on site to do your hair in a ‘festival’ hairdo if you wanted to wait in line. These were premium sized samples from everyone (technically full from Pure Romance) and even the lower budget ones were giving away sunglasses and bracelets. Warsteiner was even giving away T-shirts and had an air conditioned lounge for people to relax in and drink beer. Even Black & Mild had cheap tobacco, cold towels and free mini speakers for those who went into their tent. In the freebies and things to do section, the festival had the best I’ve ever seen this year, especially for the smaller selection. 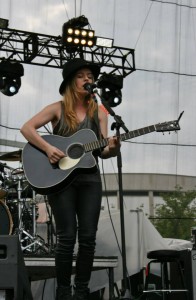 What festival would be complete without delicious and convenient food everywhere? A very hot trend right now in the foodie world revolves around using local, fresh ingredients. The food and drink selection was all about the local craftspeople from local beer and liquor, to food trucks and even a few selective locally minded corporate entities. I for one am all about this current trend, especially since it throws the money right back into the local economy. Everyone’s a winner!

Now, on to the music. Some of the headliners I got to see were New Politics, Paramore, Fall Out Boy, ZZ Ward, X Ambassadors, Empire of the Sun, Young The Giant, Cage The Elephant and Fitz & The Tantrums to name a few of the main stage acts. There were six6 stages all together including a solely acoustic stage that was new this year, and the variety of musical tastes represented was pretty great. There seemed to be something for everyone and as I am one of those people who is all over the place musically these kind of setups really make me feel like I’m getting a lot of bang for my buck.

Each set I caught did not disappoint in entertainment, quality of music or stage show regardless of genre or production budget. One criticism I read about last year’s festival is that a lot of the bigger name bands were from the school of…”We’re here to play music, not to give you flash bangs and confetti.”. Well, apparently the people who booked the headliners this year got the memo and put a wide array of production budgets into the lineup. The Flaming Lips and Empire of the Sun are known for their costly and eccentric stage shows involving lots of lights and conceptual art themes. Even if you were not a huge fan going in of the music, you most certainly were entertained and had plenty to look at during the set. While all of this could be going on for the main show stages, in stark contrast we had the acoustic stage, often with one performer and one guitar, these artists were really into playing their heart out and connecting with the audience. The styles varied on the other stages across the entire spectrum and whatever style I was looking for I could find it at some point at one of the stages during the festival. 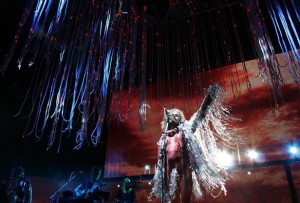 With any live show you’ll have moments where equipment fails for a moment but I got to see a true first at Bunbury. Paramore decided to stop their set because something was going on in the crowd and they were really concerned for people’s safety. Turns out, a stray skunk had wandered into the crowd and people were trying to avoid the spray from the scared creature. At least, that’s what was announced from the stage. In true rock dedication the drenched and now smelly concertgoers opted to stay where they were and just endure the stench. Later it was speculated (by other press people in the media tent , that it might have actually been a stink bomb) but I do believe that the skunk version is a better story.

Picture this poor scared creature (we will call him Flower) hiding out under this giant stage, listening to Paramore rocking out for two songs and losing his mind. Just when things calm down and this melodious tune (‘The Only Exception’) begins, Flower sees his chance to escape…Only to be met by giant men in neon yellow security shirts and a crowd full of shrieking and freaked out humans trying to avoid his rear end. I like to think that Flower escaped, exhausted but unharmed and had quite a story to tell his wife when he got back to the nest. More importantly, Haley Williams will forever remember Bunbury 2014 as the time when a skunk interrupted her set. Yay?

Not only did I get to catch a set paused by skunk sabotage, I caught some really great sets from the above mentioned bands and others. In addition, I got to have a chat with a few bands. You can catch the full interviews in separate articles.

Overall, I personally enjoyed my time at the festival both as a Press member and a festival goer. If you have the time and if the lineup looks good to you next year come on down to Cincinnati and check it out next summer. If so, stop and say hello to me. I’ll be the one in the photo pit wearing the bright pink backpack.