Avid gaming fans came from around the world to celebrate Call of Duty XP at the Forum September 2-4th.

This past weekend in anticipation of the upcoming Call of Duty XP game Activision hosted a three day fan event. Players flocked from around the world for a chance to play the upcoming game ahead of it’s release. With a worldwide competition going down inside the forum’s massive stadium. It was the ultimate video game face-off. Team Envyus took home the grand prize of $800k (a stellar record $2million was awarded total..WHAT?! Can we be professional video gamers STAT?). The event was officially known as ‘The Call of Duty World League Championship Esports Tournament’ presented by Playstation 4. We’re still reeling at the number and have taken a break for life support.

Aside from a record breaking win, the Forum was transformed into a military gaming dream. Attendee’s had the chance to zipline, play an awesome round of retro 80’s Zombie later tag, a real life paintball war was in full effect, as well as sumo wrestling, and other exclusive gaming previews. Our favorite game to try was an immersive 3D experience in a fighter jet cockpit, space fight. Is this real life? Players were escorted into a private cockpit complete with pilots seat and control panels. Once handed the playstation controller you were also provided with the 3D glasses that transported you into an active space war zone. Oh did we mention looking at the target pinpoints them? Yeah like a sniper, we were all about it! The weekend concluded with a star studded performance featuring Wiz Khalifa and Snoop Dogg.

You can relive the live event here: CALLOFDUTY

If you did make it this past weekend to rock out to all the fun, you weren’t alone! Celeb notable Michelle Rodriguez is never one to miss an adventure and she rocked The Call of Duty event in her best style; daring adventure. 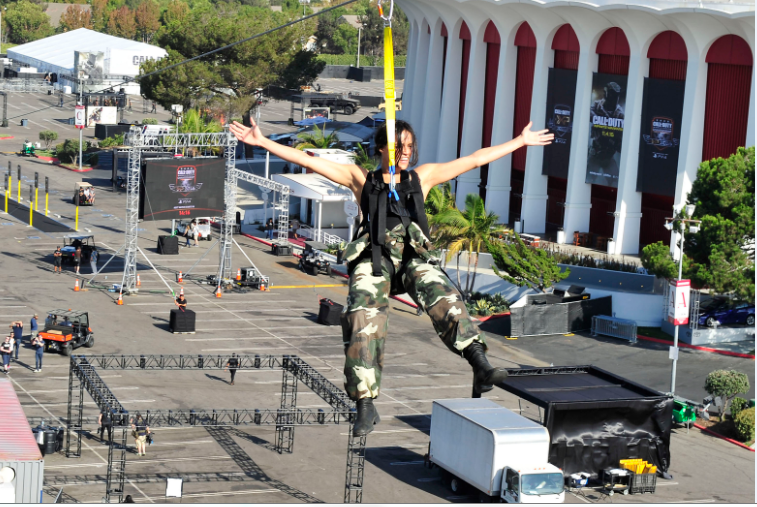