Captain America: Civil War is everything Batman v. Superman desperately wanted to be but just couldn’t get there. Minor spoilers ahead.

The Russo Brothers deserve a round of applause (and a lot more movies) for bringing Captain America: Civil War to life in a way that will delight both casual and hardcore fans alike. Bringing the storyline, one of the most famous in recent Marvel comics history, into the real world is no easy task but the two managed to execute it brilliantly.

All of the Avengers movies have been slowly building to Civil War as the film addresses the damage the team has created while it was out saving the world. None of this is taken lightly and the catalyst for bringing about the rift is something that could easily happen in real life under similar circumstances. At its core the film is about patriotism, duty and doing the right thing. Thankfully it is smart enough to realize that isn’t always an easy choice and the answer is a bit of a gray area. But its willingness to explore that abstract concept allows the movie to stand on its own merits. 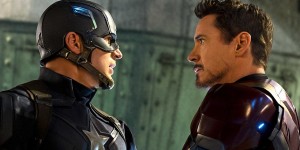 Chris Evans and Robert Downey Jr. give stellar performances that drive the movie.

This is no easy task considering the story involves almost a dozen individual characters with unique backstories and the introduction of more than a few new faces each with their own complex history. Yet none of it feels forced. Even during the big battle where all hell breaks loose every single hero in the movie has a reason for being there and a clear goal. Their chemistry in that fight alone elevates the film to one of the best superhero movies of all time.

Of course much of that has to do with the stellar cast that is, for the most part, already very comfortable in their roles. Robert Downey Jr. could play Tony Stark in his sleep but he continues to find new ground with the character. Chris Evens was made to play Captain America and it shows in every single frame. Even the minor characters like Vision and Scarlet Witch get some 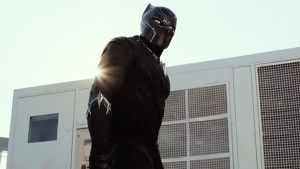 well-deserved screen time to explore their role in the cinematic universe. It’s not easy playing an alien robot but Paul Bettany pulls it off in a way that truly makes you feel for him as he struggles with his identity. Not everyone could have pulled such a feat off but the combined efforts of the A-list cast make every punch and explosion all the more meaningful.

Even the new blood stands out and holds their own against the seasoned veterans. Tom Holland is easily the best onscreen Spider-Man to date and even with limited screen time has far more character development than Tobey Maquire or Andrew Garfield combined. Plus the evolution of his character makes sense. Things don’t just magically appear, the world around him helps create his character. Not operating in a vacuum is the best thing that could have happened to Spider-Man.

Chadwick Boseman dominates every single frame of the screen and usually barely says a word. The long-awaited superhero was a tricky one to pull off since he’s basically a large panther but the Russo Brothers found a believable way to make his costume functional and realistic in the context of the movie. Expect much more from Boseman as he is likely to be a major part of Marvel’s Phase three.

As always make sure to stay until the lights go up in the theater as there are two mid-credit scenes both of which are crucial to the expansion of the Marvel Cinematic Universe.