Press Pass LA was invited to Marvel’s Captain America: Winter Soldier press conference in Beverly Hills. Chris Evans and Samuel L. Jackson were among the stars who spoke to the press for the highly anticipated film.

Evans seemed very enthused to share his insight on what could be one of the biggest movies to hit theaters prior to summer. “Since Marvel can’t stop making quality movies, it’s exciting, it’s humbling and it’s an honor to be here,” said Evans.

The movie takes place shortly after the events that transpired in the Avengers. Marvel’s Captain America: The Winter Soldier finds Steve Rogers, aka Captain America, living quietly in Washington, D.C. and trying to adjust to the modern world. However, when S.H.I.E.L.D. colleagues comes under attack, Steve becomes embroiled in a web of intrigue that threatens to put the world at risk. Joining forces with Natasha Romanoff (aka Black Widow), Captain America struggles to expose the ever widening conspiracy while fighting off assailants sent to silence him at every turn.
“She’s extremely smart,” Johansson said about her character, Black Widow. “She has a lot of foresight.” 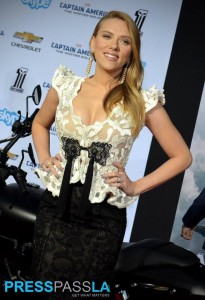 When the full scope of the villainous plot is revealed, Captain America and the Black Widow enlist the help of a new ally, the Falcon. However, they soon find themselves up against an unexpected and formidable enemy –the Winter Soldier.